Dhanush’s Maaran to Release Directly on Disney+ Hotstar: Motion Poster to be Revealed on January 14

Dhanush’s Maaran Motion Poster is to be out this Pongal on January 14. The film will be directly releasing on the Disney+ Hotstar app. 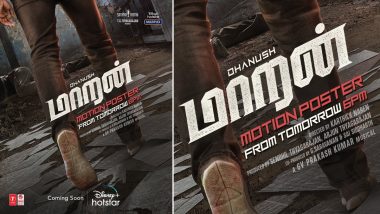 Dhanush will be next seen up for the upcoming film Maaran and apart from acting, the south star also contributes his voice for the opening track of the movie. Now, the makers are all set to release the film's motion poster this Pongal on January 14.

(The above story first appeared on LatestLY on Jan 13, 2022 06:39 PM IST. For more news and updates on politics, world, sports, entertainment and lifestyle, log on to our website latestly.com).