Good Luck Sakhi: Did You Know Keerthy Suresh's Next is Also Inspired by Sharpshooters Chandro and Prakashi Tomar?

Keerthy Suresh's next is a sports romedy wherein she plays the role of a sharpshooter but the film also shares a similarity with Bhumi Pednekar and Taapsee Pannu's Saand Ki Aankh. 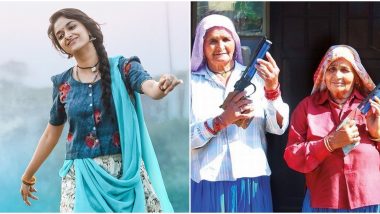 After marking her digital debut with Penguin this year, Keerthy Suresh is looking forward to Good Luck Sakhi, which interestingly also marks Nagesh Kukunoor's Telugu debut. The film helmed by this much-acclaimed director is a sports romedy that sees Suresh playing the role of a sharpshooter. However, besides revolving around the sharpshooting, it also shares another similarity with Bhumi Pednekar and Taapsee Pannu's 2019 release, Saand ki Aankh. Yes, the similarity is in getting inspired by Haryana's shooter dadis - Chandro and Prakashi Tomar. Sarkaru Vaari Paata: Keerthy Suresh Answers the Million-Dollar Question, Confirms Signing Mahesh Babu's Next.

"Back then it wasn’t often that we saw a woman shooter from a village,” Nagesh once said when asked about his inspiration for Good Luck Sakhi. He was referring to a newspaper article that he read on Prakashi and Chandro Tomar some 20 years back. The director kept his dream of pursuing this subject for so many years before deciding to fulfil it with Keerthy Suresh in the lead. Of course, she isn't playing their characters on-screen but simply a woman like them in the field of sharpshooting. The teaser of the movie was unveiled on Independence Day and it gave us a peek into her upcoming sports romedy and it sure looked fun. COVID-19 Effect: Penguin Actress Keerthy Suresh Decides to Take a Pay Cut, Will Slash her Remuneration by 20 - 30%.

When Keerthy Suresh was asked about the kind of preparation that went behind her new role, the actress in her interaction with Rajeev Masand said, "It looks easy, but it really isn’t." She also revealed how it took some time and some work for her to look natural while holding and firing a gun. The film also stars Jagapathi Babu who plays her coach in the film.

(The above story first appeared on LatestLY on Aug 15, 2020 07:43 PM IST. For more news and updates on politics, world, sports, entertainment and lifestyle, log on to our website latestly.com).