Earlier there were reports if Bollywood actress Kiara Advani will shine alongside Mahesh Babu in his next. However, Keerthy Suresh has confirmed being a part of Parasuram's next. 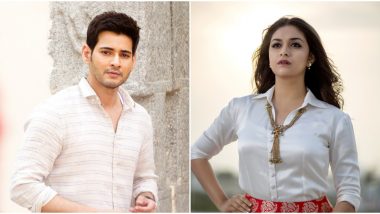 Will Mahesh Babu romance Keerthy Suresh or Kiara Advani in his next, Sarkaru Vaari Paata? That was probably THE question that was boggling our minds and thanks to the Penguin actress, we finally have confirmation. It's indeed Keerthy who will romance the South superstar in director Parasuram 's next and the same was confirmed by the actress in her recent Instagram Live session. The film would mark her first collaboration with Mahesh Babu and the excitement for the same is already sky-high. Sarkaru Vaari Paata: Mahesh Babu's Next Finds its Villain in Kichcha Sudeep?

However, turns out Keerthy wasn't always the first choice for the makers. The director had indeed approached Kiara for his next. Since Kiara had already shared the screen space with Mahesh Babu in Bharat Ane Nenu and fans had loved their pairing, he was interested in collaborating with the Bollywood actress. However, Kiara's schedule is blocked for the next few months with multiple releases and the coronavirus situation has made it worse for the actors to keep up with their planned schedule. It was only after Kiara rejected it that he approached Keerthy and she readily agreed. Sarkaru Vaari Paata: Not Mahesh Babu But Allu Arjun was the First Choice for Parasuram's Next Directorial?

The shooting of the movie is expected to start once the situation normalises in the country. Parasuram's last directorial was Geetha Govidam with Rashamika Mandana and Vijay Deverakonda and it was a big success.

(The above story first appeared on LatestLY on Jun 19, 2020 08:28 AM IST. For more news and updates on politics, world, sports, entertainment and lifestyle, log on to our website latestly.com).