Indian 2 is vigilante action thriller film that has an ensemble cast. It is the sequel to 1996 film namely, Indian. 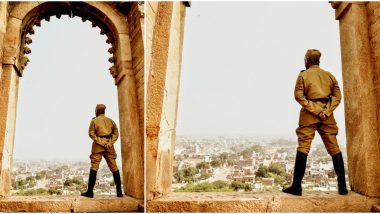 Kamal Haasan's ambitious project, Indian 2 had hit a serious controversy. The film's three crew members died in a crane accident on the set that left the entire industry in a state of shock. Since this mishap happened on 19 February, the shoot of the flick was stalled temporarily owing to the mourning period and legal cases surrounding them. As per the fresh reports, the shooting has been resumed. Indian 2 Director S Shankar Announces Rs 1 Cr Assistance for Accident Victims.

According to a report by Galatta Media, the makers started with the remaining portion of the film on Thursday. Leading actress, Kajal Aggarwal was one of the cast members who shot her part in this schedule. However, main man Kamal Haasan was not present for the shooting that was done after the accident.

Meanwhile, the case that was filed against the Lyca Productions, has moved to CBI. The actor-turned-politician had appeared before Chennai Police on March 3. He recorded his statement before Chennai Police Commissioner in Egmore regarding the three deaths and 10 other injuries that happened on the sets. Director S Shankar has announced the financial aid of Rs 1 crore to the accident victims.

Indian 2 is vigilante action thriller film that has an ensemble cast. It is the sequel to 1996 film namely, Indian. Anirudh Ravichander will work for the first time with the star and the filmmaker as the music composer. The film also stars Rakul Preet, Siddharth, Priya Bhavani Shankar, Delhi Ganesh and Nedumudi Venu in key roles.

(The above story first appeared on LatestLY on Mar 12, 2020 06:51 PM IST. For more news and updates on politics, world, sports, entertainment and lifestyle, log on to our website latestly.com).