Into The Wild With Bear Grylls and Superstar Rajinikanth Promo: Thalaiva Is All Set To Impress Fans With His Adventurous Side On 23 March 2020 (Watch Video)

In the teaser, we get to see the lush green Bandipur forest in Karnataka. We can see Bear riding on a bike on the deserted pathways in the forest. 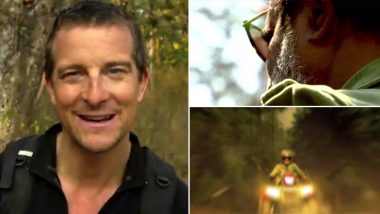 Into The Wild With Bear Grylls and Rajinikanth (Photo Credits: Twitter)

Rajinikanth fans are elated as the day when he will share the screen space with Man Vs Wild fame Bear Grylls is near. The south superstar shot for the special episode of Discovery Channel show, 'Into The Wild' with the host recently. Finally, after a long impatient wait, the first teaser video of the episode has been finally released by the makers and it is interesting! This episode is titled as 'Into The Wild With Bear Grylls and Superstar Rajinikanth,' and the video shows us a glimpse from the adventurous episode. Man Vs Wild: Akshay Kumar Becomes the First Bollywood Actor to Shoot an Episode With Bear Grylls!.

In the teaser, we get to see the lush green Bandipur forest in Karnataka. We can see Bear riding on a bike on the deserted pathways in the forest. He also sweetly warns his fans, 'Prepare yourself, this is gonna blow your mind.' Then we see unclear glimpses of Thalaiva who is seen riding a bike in the forest as well. The entire teaser sure looks adventurous and a fun episode to look forward to! Check it out below.

Gear up to venture into the wilderness of India with survival expert @BearGrylls and the ultimate superstar @Rajinikanth in an action packed adventure. Premieres 23 March at 8 PM, only on Discovery #ThalaivaOnDiscovery pic.twitter.com/zSS4GsSCL4

Earlier, it was reported that Rajinikanth was injured while shooting for the episode. However, it was later clarified that no injuries were suffered by the Tamil actor and that the scene was scripted. T. Balachandra, the reserve's director and conservator of forests, told IANS, "It is all false. As per the screenplay, there was a shot in which Rajinikanth had to fall, so while getting down from the rope, he just fell down and everybody rushed. It was all in the screenplay." The episode is going to be aired on 23 March at 8 PM on Discovery India. Are you excited for this visual treat?

(The above story first appeared on LatestLY on Feb 27, 2020 03:09 PM IST. For more news and updates on politics, world, sports, entertainment and lifestyle, log on to our website latestly.com).