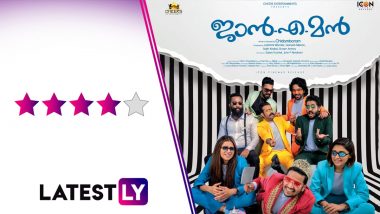 Jan.E.Man Movie Review: Dear boy Chidambaram! What a movie, man! As the mind tries to grapples with the hurtful events around the world, in a week, where even the new movies didn't offer much of a respite, your movie Jan.E.Man has been an extremely pleasant offering. Hadn't gotten to watch Jan.E.Man when it came to the theatres, but I am glad that I caught it on its OTT premiere on Sun NXT. If this is your debut movie as a director, then boy, you can only blame yourself for setting your benchmark way so high for your next movie to follow. Which I am very much excited to wait and watch! Minnal Murali Movie Review: Tovino Thomas Gives Malayalam Movie Buffs a Superhero Worth Rooting for in Basil Joseph’s Netflix Film.

Jan.E.Man begins with the viewer getting a taste of the lonely life of Joymon (Minnal Murali director Basil Joseph), a nurse stationed somewhere in the snowy landscapes of Canada. His desolate existence, where only Alexa is his sole companion, is making Joymon yearn for friendly human company. While his loneliness would have made a grim picture, the movie paints the scenes with humorous strokes that don't feel out of place. That's the first sign of how maturely the director has handled the humour in the film.

Anyway, Joymon decides to return to Kerala to ring in his 30th birthday which he wants to celebrate with his old schoolmates. Faisal (Ganapathi, also the director's younger brother), a skin doctor and one such schoolmate, agrees to arrange for the party and he convinces another of Joymon's schoolmate Sampath (Arjun Ashokan) to have the party at his house. While Sampath has no love for Joymon, he agrees on the tempting possibility of drinking Canadian scotch.

However, while Sampath's house readies for a birthday party that not everyone in on board with, things get complicated when a death happens in the neighbour's house.

Jan.E.Man is a wonderful display of contrast both in its setting and its depiction of human behaviours. By paralleling the events that happen in the two houses divided by only a small road, the movie shows how different humans behave around the concepts of birthdays and death, and yet in them, Jan.E.Man seeks out some humorous commonalties (drinking, a favourite Kerala pastime, finds love in both the occasions). It is not just in the mood or in the character behaviour or in social diversity (Sampath's household is more well to do, while his neighbours not so much and are also settlers from another place), but even in the lighting and the camera movements, Jan.E.Man puts up a convincing paradox. But the best part is how the film moves smoothly from the merrymaking in one house to the laments in the other, and then to cobble them together in that brilliant montage set against the Christian mourning song "Samayam Rathathil Njan." Oruthee Trailer: Navya Nair, Saiju Kurup, Vinayakan’s Upcoming Malayalam Film Focuses On Relationships And Survival.

I laughed out hard when Sampath confronts Faisal who blames Joymon for bringing unwanted guests to his house, during which when Joymon's Versace T-shirt gets insulted as a Shaktiman dress. And I also teared up when the dead man's wayward son Monicchan (Balu Varghese) laments to his sisters why he is the way he is. Jan.E.Man gets even better when the lines between the houses get blurred, and characters move across the houses.

The screenplay is full of some nice surprises that keeps on delivering. You know that a clash is waiting to happen, considering Monicchan and Sampath have a past and basically everyone is irritated with Joymon, and it does happen. Just not when you expect it. The movie plays up a scene upto your expectation, and does a very wonderful U-Turn that leaves you pleased. The third act is easily the best part of the movie with a heartwarming embrace of its inherent chaos and some nice twists.

Even more wonderful is how Jan.E.Man pushes its characters into startling directions. Like for example, Joymon gains your sympathy with his lonely existence, but his brash and insensitive behaviour at Sampath's house annoys you, only for the character to gain back your sympathy during an unexpected conversation. Similarly, a drunk Monicchan makes his intro by peeing on Sampath's wall, but by the end, you feel hard for him. The veteran Lal, who plays the dead man's adoring brother, is someone who seems to have a hold of every situation before it turns bad, but cannot contain his child-like glee when he meets a TV star.

Even the secondary characters manage to make unforeseen impact in their own ways. A character who is touted to be rowdy shares his anguish on how he is not getting a girl to marry him. An opportunistic event manager called Akshay Kumar (Abhiram Radhakrishnan) turns into an unexpected (super)hero at an unexpected moment. So on and so on...

A little grouse here is that I wish that the female characters had more to do in comparison. The pacing in between also dips down, but the third act more than makes up for it with a conclusion that surmises its feel-good nature in its utmost wholesomeness, but not before shaking things up hard

And just what to say about the performances here! Chidambaram has brought in some very excellent actors, all working well in their roles no matter what the screentime or capacity. Basil Joseph, Ganapathi (super-talented he is), Arjun Ashokan (nepotism isn't always bad), Balu Varghese (a stunning subversion), Lal, Siddharth Menon, Sajin Gopu, Riya Saira, Gilu Joseph, Ganga Meera, Abhiram Radhakrishnan, Chembil Ashokan, Sruthy Sathyan, Prapti Elizabeth are all so good.

- The Direction, The Writing, The Performances, The Use of Humour Balanced Against the Dramatic Moments

- Female Characters Could Have Been Written Better

Jan.E.Man needs to reach its climax to justify why it is named so, but when it does, do try hard to suppress that wonderful feeling in your chest. The movie works like a magical charm that makes you laugh, leaves you emotional and then ends you up in happy tears. Jan.E.Man is streaming on Sun NXT.

(The above story first appeared on LatestLY on Feb 25, 2022 08:56 PM IST. For more news and updates on politics, world, sports, entertainment and lifestyle, log on to our website latestly.com).