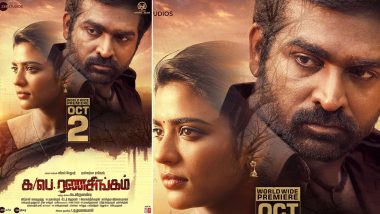 Helmed by P Virumandi and produced by Kotapadi J Rajesh under KJR Banner, Vijay Sethupathi's next film was the recent victim of the shut down of theatres. In the post-COVID-19 lockdown world where theatres all over the country are yet to resume operations, a lot of films have gone digital. While some have struck a deal with the OTT giants, others are following the pay-per-view model. Recently, Disney's Mulan had released in the same model. Joining this league is actor Vijay Sethupathi and Aishwarya Rajesh starrer Ka Pae Ranasingam. Vijay Sethupathi's Ka Pae Ranasingam Heads for Digital Release Under Pay per View Model.

The film, that revolves around the struggle of farmers and is based on real life incidents, was recently announced to be launching online in the pay-per-view model and will be streaming on Zee Plex. The film will be releasing on October 2, 2020. Ka Pae Ranasingam Teaser: Vijay Sethupati and Aishwarya Rajesh Present a Powerful Social Commentary Highlighting the Plight of Farmers (Watch Video).

The biggest DTH & OTT release you have witnessed so far! 🔥 Watch #KaPaeRanasingam from the comfort of your homes from 2nd of October on @zeeplexofficial 🎬 pic.twitter.com/yQGm5OscKK

Ka Pae Ranasingam is a social drama, that will see Vijay Sethupathi in the role of a farmer and actress Aishwarya Rajesh play his wife. The duo is seen standing up for the rights of farmers and how the corporate sector and politicians trample all over the sons of the soil for their personal gains and profits. The hard-hitting drama's teaser promises an interesting watch.

(The above story first appeared on LatestLY on Sep 15, 2020 06:59 PM IST. For more news and updates on politics, world, sports, entertainment and lifestyle, log on to our website latestly.com).