Kadaram Kondan: All You Need to Know about Chiyaan Vikram’s Action Thriller! 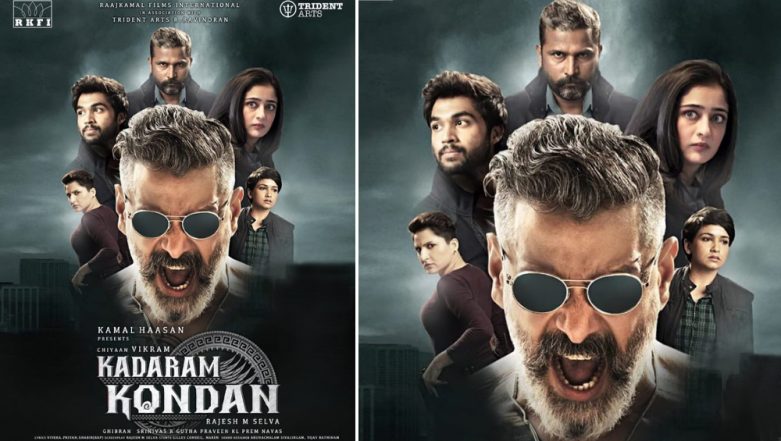 Vikram who is fondly called as Chiyaan Vikram, was last seen in the Tamil-language film Saamy Square. Fans of the superstar are pretty excited as his next film titled Kadaram Kondan is all set to hit the silver screens in few days. Today the makers of Kadaram Kondan would be releasing the film’s trailer and fans just cannot wait to watch it. Before that, let’s take a look at the cast and other intriguing details of Chiyaan Vikram’s Kadaram Kondan. Chiyaan Vikram Records a Song for Kadaram Kondan, Composed by Ghibran – See Pics.

Directed by Rajesh Selva, Kadaram Kondan features Vikram and Akshara Haasan in the lead. The film also stars Lena and Pooja Kumar in key roles. When the makers had unveiled the first look poster, fans got a glimpse of the cast. And this is the first time that filmmaker Rajesh Selva and Vikram have collaborated for a project.

The film was earlier supposed to be produced by Chandrahasan under the banner Raaj Kamal Films International. However, due to his death the film is now produced by his brother, Kamal Haasan. It was in last August that Kamal Haasan had officially announced that he'd be producing the film and Rajesh Selva would be directing it.

The songs of Kadaram Kondan have been composed by Ghibran. Kamal Haasan’s daughter Shruti and the film’s lead actor Vikram, each of them have recorded a song for this film. CONFIRMED! Suriya – Chiyaan Vikram’s Tamil Hit Pithamagan to Remade in Hindi.

It was on the eve of Kamal Haasan’s birthday the film’s title was revealed and also the first look poster was released. This action thriller is all set to hit the silver screens on July 19.

Major portion of Kadaram Kondan has been shot in Malaysia. After seeing the poster and the intriguing teaser, the expectations are high. In fact many have already given this yet to be released film a thumbs up. Let’s wait and watch how the audience responds to the trailer which will be out today!