Kajal Aggarwal Unveils Her Wax Statue in Madame Tussauds Singapore And It Is Impressive! (View Pics) 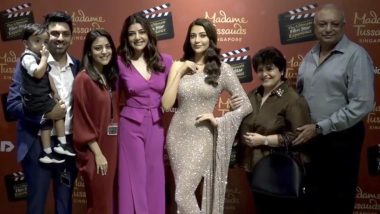 It is always an honour for the celebs when they get their wax statue made! Madame Tussauds bestows this honour on the celebs who have immense fanbase or have done a commendable job in their field. After Hollywood and Bollywood, Tollywood stars too are finding a place in this coveted list. After Telugu film star Mahesh Babu, Kajal Aggarwal now has her wax figure unveiled at Madame Tussauds Singapore. The pictures from the event surfaced and we must say that they are quite impressive.

It is very crucial that the wax figure gets the closest to the real-life features of the celeb or it can be a major disaster. Earlier, we have also seen such instances with regards to some celebs. Thankfully, the Singham actress has her wax statue on point! Kajal's statue is seen wearing a body-hugging shimmery gown. The hairstyle is beachy waves. On the other hand, the 'real' Kajal wore a Fuschia pink suit.

Earlier, the actress was quoted expressing excitement, saying, "This feels like a fabulous culmination so far and a great way to start the new decade on a good note.. the insane hours of hard work and personal sacrifices, all feel worth it.. forever thankful to have all of you by my side.. this ones for each one of you!." Well, we totally loved the wax replica of Ms Aggarwal! What are your thoughts?

(The above story first appeared on LatestLY on Feb 05, 2020 10:35 AM IST. For more news and updates on politics, world, sports, entertainment and lifestyle, log on to our website latestly.com).