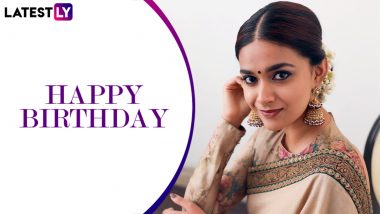 Keerthy Suresh, who has turned a year older on October 17, is one of the most sought after actresses down south. She has worked with many leading filmmakers and actors over the years. Be it the role of a girl-next-door, a businesswoman or any other role, she has aced it with sheer brilliance. Daughter of film producer G Suresh Kumar and actress Menaka, the 29-year-old actress had started her acting career in the early 2000s. She has worked in Telugu, Malayalam and Tamil films too. Annaatthe First Look Out! Rajinikanth, Keerthy Suresh-Starrer to Arrive in Theatres on November 4.

Keerthy Suresh is a busy bee with ample of intriguing projects in her kitty. While some films are ready to be released, shooting of a few films are going on. You’d be amazed to see the film’s lined-up for this south beauty. Let’s take a look at those eight films in which Keerthy would be starring in.

Marakkar: Arabikadalinte Simham – Keerthy Suresh would be sharing screen space with Mohanlal and many other popular actors in this Malayalam film that is helmed by Priyadarshan. It is around the story of Kunjali Marakkar IV.

Good Luck Sakhi – The birthday girl would be seen essaying the role of Sakhi, a sharpshooter, in the film written and directed by Nagesh Kukunoor. She’d be sharing screen space with Aadhi Pinisetty and Jagapathi Babu in this movie. This films marks the directorial debut of the filmmaker in Telugu Cinema.

Annaatthe – The Rajinikanth starrer features an ensemble cast and Keerthy Suresh would also be seen as one of the leading actresses. Directed by Siva, this film is slated to be released on November 4, 2021.

Saani Kaayidham – Keerthy and director Selvaraghavan have teamed up for Arun Matheswaran’s directorial. This Tamil movie is touted to be an action-drama that is set in the 1980s.

Vaashi – The actress will be seen as the female lead in this Malayalam film and Tovino Thomas as the male lead. This film is special to Keerthy as it is bankrolled by her father, and her mother and sister are the co-producers.

Sarkaru Vaari Paata – Keerthy and Mahesh Babu have teamed for the film written and directed by Parasuram. This another highly-anticipated movie of the actress that is set to be released during the time of Sankranthi next year.

Bholaa Shankar – Another mega project with a megastar! Keerthy would be seen playing the role of Chiranjeevi’s sister in the film directed by Meher Ramesh. The movie is a Telugu remake of the Tamil blockbuster, Vedalam.

Dasara – Keerthy Suresh and Nani are onboard for newcomer Srikanth Odela’s movie. The two stars had earlier shared screen space for the film Nenu Local.

These are the upcoming projects of the National Film Award-winning actress. We just cannot wait to watch her in these movies. We wish Keerthy Suresh a very happy birthday and many more amazing projects.

(The above story first appeared on LatestLY on Oct 17, 2021 12:01 AM IST. For more news and updates on politics, world, sports, entertainment and lifestyle, log on to our website latestly.com).