KGF Chapter 2: Sanjay Dutt Gears Up To Play The Role Of Adheera! Actor All Set To Start Shooting For Prashanth Neel Directorial 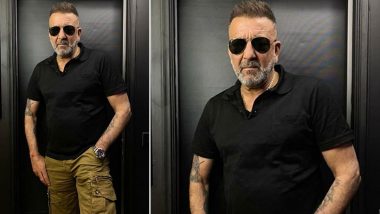 The upcoming Kannada film KGF: Chapter 2 is one of the most anticipated movies starring Yash and Sanjay Dutt in the lead. Yash would be reprising his role from the first film, whereas the Bollywood actor would be seen playing the antagonist, Adheera, a very powerful role. It was on the occasion of Sanjay Dutt’s birthday when the makers had shared the actor’s first look from the film and it was deadly. His dangerous character with scary makeup did grab eyeballs. KGF Chapter 2: Sanjay Dutt Shares His Deadly Look As Adheera in the Upcoming Action Drama (View Pic).

Sanjay Dutt is all set to start shooting for Prashanth Neel directorial KGF: Chapter 2. He has shared a series of pictures on social media platforms and stated that he is gearing up to play the role of Adheera. It was just a day ago when Prashanth had shared a video in which the actor had shared that he’d be back to the sets soon and that is from November. Sanjay Dutt Says ‘Will Beat Cancer and Resume KGF 2 Shoot and Shamshera Dubbing Soon’.

It was the video from Hairstylist Aalim Hakim's salon, in which Sanjay Dutt pointed at a scar running from his left eyebrow to the side of his head. He said, “This is a recent scar in my life. But I will beat it. I will be out of this cancer soon.” The veteran actor had taken a short break from work for medical treatment and right now, he is happy to return to the sets again!

(The above story first appeared on LatestLY on Oct 16, 2020 01:16 PM IST. For more news and updates on politics, world, sports, entertainment and lifestyle, log on to our website latestly.com).