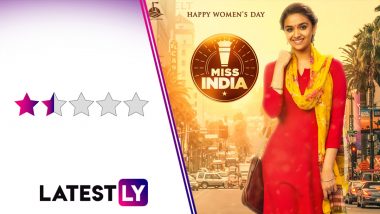 Miss India Movie Review: Forget Hindu-Muslim. Forget India-Pakistan. Keerthy Suresh's new film, Miss India, pits new rivals against each other - coffee drinkers vs chai lovers. And if you are Modi bhakt, you would be happy to know that tea earns a huge victory in Miss India - a title that stands for its protagonist, the tea brand she starts and a populist NRI sentiment. Miss India, directed by Narendra Nath, is about how Manasa Samyuktha (Keerthy Suresh), an ambitious MBA graduate, made tea America's favourite beverage in what is the land of coffee-drinkers, as every other character keeps reminding us. Perhaps that premise wouldn't have worked if Miss India was, to say, set in England! OTT Releases Of The Week: Angad Bedi's MUMBhai on Zee5, Keerthy Suresh's Miss India on Netflix, Mark McKenna's Wayne on Amazon Prime and More.

In the beginning of the film itself, we know that Manasa's Miss India journey is a success story. What we are then shown is how she reached to the top, fighting family pressures and devious competitions, by making white folks (who speaks in robotic tones) a slave for her tea.

As someone wise said, the journey is often more fascinating than the destination. Unfortunately, in the case of Miss India, there is nothing in Manasa's journey that make you want to stick to the end for the dessert.

Unless, of course, you are a die-hard Keerthy Suresh fan. Then Miss India offers your idol quite a lot of scenes with mass appeal and punchlines, and gets to sport some cool glares.

Watch the Trailer of Miss India:

Premise-wise, Miss India should have worked. It is glamorous tale of a Indian, from a village in Andhra, achieving the Great American Dream in California. It is about a woman fighting patriarchal mindsets to reach the top. My one fave scene in the film is, after she rejects her boyfriend's marriage proposal, Manasa is chided by her mother (a graceful Nadhiya Moidu, totally wasted) that she won't find anyone suitable. Manasa responds back saying that her mother should see if any of her suitors are worthy of her actually. Bravura line, and the only time I mentally applauded in the film. Miss India Trailer: Keerthy Suresh’s Netflix Film Gives Us Glimpses Of A Simple Girl Who Aspires To Become A Successful Entrepreneur.

Otherwise, Miss India, despite our affinity for inspiring underdog tales, turns into a lost opportunity thanks to some very plain, predictable writing and its lengthy runtime. It is a film where people, even characters actually studying for MBA, baulk at the idea of its protagonist wanting to do business. As if she revealed her ambition to be a Roadie! Like her two dumb fellow students, for example, who might not even be aware of the full form of the course they are doing.

It is a film where things escalate quite quickly. One moment, Manasa's family discusses how to educate her sister, and the very next second, she comes home married with her husband. I was really curious to know her reasoning to drop this shocker on her family - and her husband was even about to tell us that - but a stern glance from Manasa's mother turns him into Maun Mohan Singh. In another scene, Manasa's brother gifts her a nice watch, and the very next moment, threatens to throw her out of his house if she doesn't toe his line. Or that amazing scene, where a boy who is tricked out of a relationship because of Manasa's stupid Truth or Dare challenge, immediately asks her out for a date. And yup, she accepts.

Miss India is a film where the protagonist is smart enough to chalk a successful business plan, but is lazy enough to not research on the investors she has to market, or how they at least look. Or for the matter, ask her boyfriend where he works.

Speaking of boyfriends, Miss India is a film where the protagonist somehow finds men who drops the M-word before they could even begin the alphabets of romance. Is this what they mean when NRI's say, 'America mein India waali feel'?. Which reminds me, every Indian character that Manasa meets in USA is Telugu-speaking, and every American she meets seems to understand Telugu.

Miss India is also a film where the protagonist, or for the matter, every character behaves like a walking-talking Pinterest, spouting solemn soliloquies, whether the situation demands or not. Miss India is also one of the films where Jagapathi Babu plays an archetypal Jagapathi Babu villain, albeit with an absurd intro scene and even absurder final scene. Finally, Miss India is a film where a talented performer actress like Keerthy Suresh has to act as if she is suffering from a painful toothache. We really want to reach out to her and say, 'Chill girl! Have some chai!'

- The Locales Are Beautifully Shot

Miss India could have been a delicious beverage like Manasa's chai, but doesn't turn out that way thanks to its bland, overused recipe. Even Keerthy Suresh's commanding presence doesn't offer enough spice to retain any flavour. Miss India is streaming on Netflix.

(The above story first appeared on LatestLY on Nov 04, 2020 03:31 AM IST. For more news and updates on politics, world, sports, entertainment and lifestyle, log on to our website latestly.com).