Produced under the banner of East Coast Productions, Miss India is Keerthy Suresh’s 20th film and it is all set to be released on Netflix on November 4, 2020. 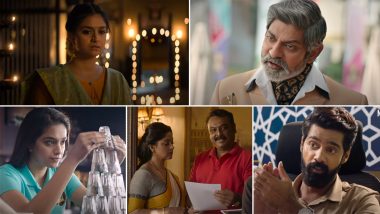 The makers of the upcoming Telugu film, Miss India, starring National Award-winning actress Keerthy Suresh, had shared that the film would not be releasing in theatres but would be premiering directly on the streaming giant, Netflix. It has been a long time since fans have been waiting to watch the trailer of Miss India and here it is! The makers have released the much-awaited trailer of this film and it is indeed an electrifying one. Keerthy Suresh’s Film with Narendra Nath Is Titled Miss India!

The trailer of Miss India gives us glimpses of a simple girl who aspires to become a successful entrepreneur. Keerthy plays the character Samyuktha. The opening of the trailer shows the young version of Samyuktha who is seen expressing her wishes to an elder who asks her, ‘What do you want to be when you grow up?’ To this the young child says that after completing her MBA she would love to start a business. However, like many young girls face the problem, even Samyuktha does. Her family isn’t supportive of her decision.

The trailer further highlights how this young girl grows into a beautiful woman and works towards her dreams of becoming a successful entrepreneur. Be it friends or family, all are shocked to hear that her plan is to introduce Indian Chai in foreign market. While some encourage her idea, there are many who challenge her decision and the antagonist (Jagapathi Babu) says, ‘Business is not a game for women. Business is a war’. And that’s how this young lady introduces her brand ‘Miss India’. Miss India: Keerthy Suresh Starrer Gets a Release Date, All Set to Hit the Screens on April 17.

Watch The Trailer Of Miss India Below:

Miss India is helmed by Narendra Nath and it also features Naveen Chandra, Kamal Kamaraju and . Naresh in key roles. Produced under the banner of East Coast Productions, this is Keerthy Suresh’s 20th film and it is all set to be released on Netflix on November 4, 2020.

(The above story first appeared on LatestLY on Oct 24, 2020 12:22 PM IST. For more news and updates on politics, world, sports, entertainment and lifestyle, log on to our website latestly.com).