Mohanlal’s Marakkar Arabikadalinte Simham All Set To Be Released In Theatres On March 26, 2021!

The makers of Marakkar Arabikadalinte Simham have announced that this magnum opus is all set to be released in theatres on March 26, 2021. 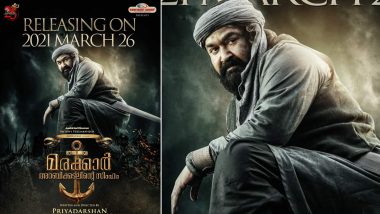 On the day of New Year, Mollywood superstar Mohanlal announced about the release of Drishyam 2 with a teaser. It was one of the best treats for fans, but many were disappointed as the makers decided to release it on Amazon Prime Video and skipped theatrical release. Then fans of Lalettan started to drop comments about how they’d be happy if his film Marakkar Arabikadalinte Simham gets a theatrical release, and here you go! The makers of Marakkar Arabikadalinte Simham have announced that this magnum opus is all set to be released in theatres on March 26, 2021. Drishyam 2: Mohanlal’s Malayalam Film To Release On Amazon Prime Video And See What Fans Have To Say About It.

This announcement on the second day of the new year was totally unexpected for all fans and now all are jumping with joy and gearing up to watch  Marakkar Arabikadalinte Simham on the big screen. Written and directed by Priyadarshan, this upcoming film featuring an ensemble cast, was slated to be released on March 26, 2020. But the makers had to delay the release date exactly by a year as the theatres were closed down in the wake of coronavirus pandemic. Marakkar Director Priyadarshan Gives an Update on the Release Date of Mohanlal's Next.

Marakkar Arabikadalinte Simham is touted to be the most expensive Malayalam film ever made. The film is set in the 16th century and depicts the battle exploits of the naval admiral of the Samoothiri, Kunjali Marakkar IV, the role that will be portrayed by Mohanlal. This upcoming Malayalam film is bankrolled by Antony Perumbavoor under Aashirvad Cinemas banner.

(The above story first appeared on LatestLY on Jan 02, 2021 11:40 AM IST. For more news and updates on politics, world, sports, entertainment and lifestyle, log on to our website latestly.com).