The whole team was present on the show, sharing some fun chats. Pragya Jaiswal, actor Srikanth, Boyapati Srinu, S.S. Thaman are seen having a great time on the show. 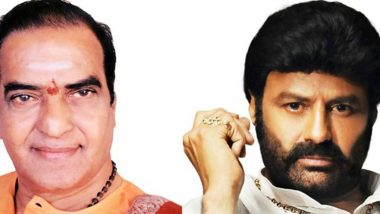 The whole team was present on the show, sharing some fun chats. Pragya Jaiswal, actor Srikanth, Boyapati Srinu, S.S. Thaman are seen having a great time on the show. Apart from the fun and games, Balakrishna is seen cracking jokes, being perky, and the others enjoy his hosting on the show. Aside:RRR: Trailer of Ram Charan, Jr NTR’s Magnum Opus To Be Out On December 9! (View Poster).

Balakrishna also openly announced that he is ready to take up a villain's role if anyone is ready with a script. "My only condition is, I must be the hero too" said Balakrishna whose witty comments made everyone laugh all the way. Srikanth, Boyapati Srinu, and Balakrishna are seen involved in a conversation, while Balakrishna also dances with Pragya.

Towards the end of the promo, Balakrishna is seen talking about the most controversial topic, as he gets emotional. For the first time, Balakrishna speaks about his late father N.T. Rama Rao, the ex-Chief Minister of Andhra Pradesh. "Most of the people believed the rumours about dad's death. People were made to believe about him being backstabbed and betrayed. This makes me emotional, as I am one of his sons, and I am one of his fans," Balakrishna said. The episode is to be aired on Aha soon.

(The above story first appeared on LatestLY on Dec 07, 2021 07:21 PM IST. For more news and updates on politics, world, sports, entertainment and lifestyle, log on to our website latestly.com).