Rakshit Shetty Birthday: Here Are The 5 Films Of This Kannada Cinema Actor That You Must Not Miss!

Rakshit Shetty is not only a popular actor, but he is also one of the most popular filmmakers in the Kannada film industry. 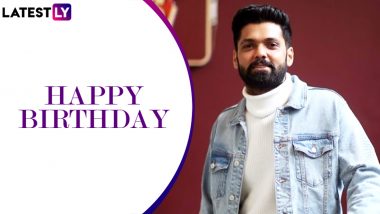 Rakshit Shetty is not only a popular actor, but he is also one of the most popular filmmakers in the Kannada film industry. Born on June 6, 1983, before stepping into the world of cinema, Rakshit worked as a software professional for two years. The handsome hunk who has won numerous awards for his impressive performances including Karnataka State Film Award, has turned a year older today. Rakshit Shetty Is Writing Punyakoti During Lockdown, Says 'It's Not as Simple as the Stuff I Wrote When I Was an Amateur'.

Rakshit Shetty’s fans have flooded social media platforms with notable stills of the actor from his films and also showered tons of love with some heart-warming messages. On the occasion of his birthday, let’s take a look at those movies of Rakshit Shetty that are a must watch.

Rakshit Shetty had made his acting debut in 2010 with the film Nam Areal Ond Dina, however, that did not shot him to fame. But it was the 2013 film Simple Agi Ondh Love Story that proved to be a breakthrough for him. And the following year he made his directorial debut.

With Ulidavaru Kandanthe that released in 2014, Rakshit Shetty had made his debut as a filmmaker. He not only helmed the film, but also played the lead role in this neo-noir crime drama anthology. This movie was later remade in Tamil titled as Richie in which Nivin Pauly lead the role.

The 2016 campus rom-com Kirik Party, starring Rakshit Shetty and Rashmika Mandanna in the lead, became one of the highest grossing Kannada film all time. Rakshit not only played the lead role and produced the film, but also co-wrote the script along with a team The Seven Odds. This blockbuster was later remade in Telugu as Kirrak Party.

(The above story first appeared on LatestLY on Jun 06, 2020 08:40 AM IST. For more news and updates on politics, world, sports, entertainment and lifestyle, log on to our website latestly.com).