Ramya Krishnan, who celebrates her 50th birthday today, has shot to fame not only in South Cinema, but also in Hindi Cinema as well. 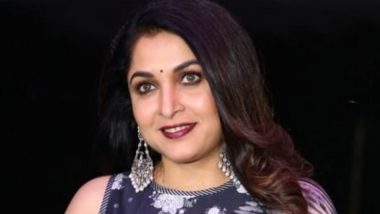 Ramya Krishnan, who celebrates her 50th birthday today, has shot to fame not only in South Cinema, but also in Hindi Cinema as well. She has done a variety of roles in her acting career and left the audience amazed with her impeccable acting skills. She has acted in more than 260 films and in five languages – Telugu, Hindi, Malayalam, Kannada and Tamil. She has also won numerous prestigious awards for her brilliant performances. Baahubali Star Ramya Krishnan Opens Up About Why She Didn’t Do Any Bollywood Films After the 90s.

Ramya Krishnan, niece of veteran Tamil comedian Cho Ramaswamy, is also a trained dancer. She has received training in Bharathanatyam, Western and Kuchipudi dance forms. It was in her early teens when Ramya stepped into the world of acting. She made her acting debut in 1984 with the Tamil film Vellai Manasu. On the occasion of her birthday, let’s take a look at some of her iconic roles that won audiences hearts.

Sutradharulu – Ramya Krishnan did see a series of flops in the beginning, however, she shot to fame through Kasinadhuni Viswanath’s directorial. It is a classic Telugu film that revolves around against violence shown in a rural background.

Allari Priyudu – Ramya Krishnan got numerous hits with K Raghavendra Rao directorial movies and she emerged as a commercial romantic diva back then. Allari Priyudu was a super-hit film at the box office in which plays the character Lalita Rani and her impeccable performance in this film helped her emerge as a leading actress in the Telugu industry in the 1990s.

Padayappa – In this Rajinikanth starrer who plays the titular role, Ramya Krishnan was seen in a negative avatar. She plays the character Neelambari, a spoilt US-returned sister of Suryaprakash (played by Nassar) who loves Padayappa.

Ore Kadal – Ramya Krishnan had played a brief role in this Malayalam movie. Starring Mammootty and Meera Jasmine in the lead, this movie was written and directed by Shyamaprasad. Ramya is seen as Mammukka’s close friend in this flick and her small role won audiences hearts.

Baahubali – This magnum opus was one of the best performances of Ramya Krishnan. She played the role of Rajamata Sivagami in this SS Rajamouli directorial.

These are some of the iconic roles played by Ramya Krishnan and we just cannot wait to see her in future projects. Here’s wishing the gorgeous actress a very happy birthday!

(The above story first appeared on LatestLY on Sep 15, 2020 08:16 AM IST. For more news and updates on politics, world, sports, entertainment and lifestyle, log on to our website latestly.com).