It has now been confirmed that Rana Daggubati and Miheeka Bajaj will tie the knot in Hyderabad on August 8, 2020. In fact, Rana's father Suresh Babu, confirmed the news to the media. 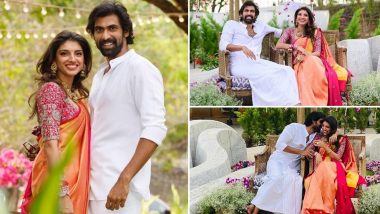 Actor Rana Daggubatii surprised one and all when on May 12, 2020, he surprised everyone with the news of his engagement to Miheeka Bajaj. In an adorable Instagram post, he wrote: "She Said Yes". Miheeka is not directly related to the entertainment industry, but her brother is married to designer Kunal Rawal's sister Sasha Rawal. Also, Miheeka is good friends with Sonam Kapoor and sister Rhea Kapoor. It's OFFICIAL! Baahubali Actor Rana Daggubati Pops the Question to Girlfriend Miheeka Bajaj and She Says 'YES'.

The couple, on May 21, 2020, had an official nischitartham ceremony (Roka) at the Ramanaidu Studios in Hyderabad, wherein their alliance was officially fixed in the presence of both the Daggubati and Bajaj families. It was also said that the families had zeroed in on the wedding date as well. Both Rana and Miheeka posted some pictures, making their relationship Instagram Official. Rana Daggubati And Fiancée Miheeka Bajaj Look Their Happiest As Families Officially Finalise Pair's Engagement and Wedding Dates (Deets Inside).

In fact, actress Samantha Akkineni too who was in attendance at Rana and Miheeka's Roka, posted a family photo, congratulating the pair on their union.

And now, a report in Deccan Chronicle has confirmed that Rana and Miheeka will tie the knot in Hyderabad on August 8, 2020. In fact, Rana's father Suresh Babu, confirmed the news and revealed that 'members of both the families would attend the ceremony, which would be performed as per government guidelines on the coronavirus epidemic.' Rana Daggubati and Miheeka Bajaj To Get Engaged Today at Hyderabad's Ramanaidu Studios? (Read Details).

In an earlier interview, with The Indian Express, Rana had recalled, "The girl was right. I can’t put it in words. I met her and felt I can do this long term with her. It happened quickly and in the most simple manner. She knew where I’m getting at when I called her. And then she met me in person, that’s it. I remember I said a bunch of things together. For me, it was serious. It was commitment. When I met her, that’s the time I felt I am ready to do this. It was that simple, for real. Well, congratulations Rana and Miheeka!

(The above story first appeared on LatestLY on May 31, 2020 03:59 PM IST. For more news and updates on politics, world, sports, entertainment and lifestyle, log on to our website latestly.com).