Remembering M Karunanidhi: Did You Know Mammootty was The First Choice to Play the Late Politician in Mani Ratnam's Iruvar?

Prakash Raj had won the National Award for the Best Supporting Actor in 1998 for his performance in Iruvar. 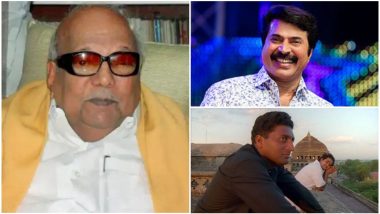 Did You Know Mammootty was to Play the Late Politician in Mani Ratnam's Iruvar?

The demise of former Tamil Nadu CM and DMK chief M Karunanidhi has left the country in a state of mourning. Karunanidhi, if you are not aware of this, was a multi-faceted personality who used to be a popular writer, having written many popular screenplays in the '50s and '60s. One of the most important phases in his life was his friendship with the late Tamil superstar turned politician,  MG Ramachandran aka MGR that went sour due to their rivalry in politics.

Based on their friendly rivalry, Mani Ratnam had made a movie called Iruvar in 1997. Even though the movie doesn't name the characters after their real-life inspirations, the audience knew whom they were aiming for. So Malayalam superstar Mohanlal played the main protagonist, Anandan, that was modelled after MGR, while Prakash Raj was Tamizhselvan, who took inspiration from Karunanidhi. Aishwarya Rai Bachchan, in her first movie ever, had a dual role in the film, where one of her characters drew parallels from the late J Jayalalitha.

But what not many knows is the fact that, earlier Malayalam superstar Mammootty was supposed to play Prakash Raj's role in Iruvar. Mammootty himself revealed the news, in his condolence FB post for Karunanidhi. He had written, "An irreplaceable loss. And the end of a great era. Writer, Author, Screen Writer, Orator and one of the greatest leaders of our time. A revolutionary. But more than all of the many facets to his persona his love for tamizh and his people stand tallest. The opportunity I had to play him in Manis film is something I miss today. All of my meetings with him are fond memories discussing cinema, politics and literature. Deeply saddened by this loss."

Now we don't know why Mammootty didn't opt for the role; maybe he didn't want to play second fiddle to Mohanlal in the film, considering they are equals in terms of superstardom. Interestingly, Prakash Raj had won the National Award for the Best Supporting Actor in 1998 for his performance in Iruvar. So Mammooty's loss is definitely Prakash Raj's gain.

(The above story first appeared on LatestLY on Aug 08, 2018 07:06 PM IST. For more news and updates on politics, world, sports, entertainment and lifestyle, log on to our website latestly.com).