SS Rajamouli presented the second trailer of his magnum opus, RRR. The new teaser introduces us to Jr NTR as Komaram Bheem, a tribal revolutionary who fought against the tyranny of Nizams in Hyderabad before India attained independence. 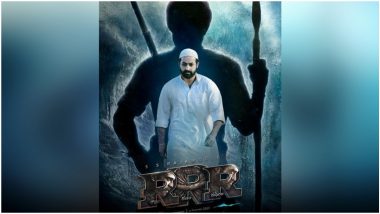 If what could be one of the best shot and edited teasers in Indian cinema this year (unrivalled only by its previous promo), SS Rajamouli presented the second trailer of his magnum opus, RRR. The new teaser introduces us to Jr NTR as Komaram Bheem, a tribal revolutionary who fought against the tyranny of Nizams in Hyderabad before India attained independence. It was a spectacular teaser, that wowed the viewers with its special effects, cinematography and Jr NTR"s amazing physique. RRR: Jr NTR Looks Fierce as Komaram Bheem and His Bravura Act Will Leave You Spellbound (Watch Video).

However, it is the last couple of frames that has Twitterati buzzing with interest (and in some cases, outrage). It turns Jr NTR's Komaram Bheem into a religious Muslim, whose peaceful outlook contrasts the character's aggressive figure earlier. Some of the right-wingers are aghast as to how what they see as a Hindu freedom fighter is 'converted' into a pious Muslim man.

Such blatant falsehood in the name of history! pic.twitter.com/4tzaXSAOcZ

Watch the Teaser of RRR below:

While we can't say much about that particular scene, because of course, it is too early. How can we judge what Rajamouli wants to convey through just one minute of footage? There is a good chance that SS Rajamouli would be revolutionising Komaram Bheem's story to make it larger-than-life, just like its star's bulging biceps. But if you do a little reading on this revolutionary's lifestory, we do can take a couple of guesses as to where Rajamouli wants to take this character.

As we have told you before, Komaram Bheem is more of a revolutionary than a freedom fighter, who took up arms against the tyrannical Nizams ruling Hyderabad and Telangana. Belonging to the Gond tribe, he was the leader of adivasi tribals, whose lands were usurped by the rulers, and he began to create stirs to fight for their rights. Adivasi revolutions don't get much importance in our history books over India's freedom struggle, something that continues to happen even in the present day.

So the valour of Komaram Bheem is known to only a few among our generation. He gave his followers the rousing war-cry of "Jal, Jungle, Zameen". The war-cry surmised the reiteration that the adivasis living in the forest have the first right over its resources, over the 'outsiders', which in this case, were the Nizams.

A comprehensive background of Komaram Bheem is explained in an article written by Akash Poyam, Founder and Editor of Adivasi Resurgence. Poyam, who himself belongs to Gond tribe, to which Komaram Bheem also was a part of, is a researcher on adivasi history and struggles. In his article, Poyam not only gives us Bheem's tragic backstory of seeing his father killed when he was merely 15, but also how he began to inspire his folks to fight against the cruelties meted against them by the Nizams, who were empowered by the British. He was also very inspired by another revolutionary, Alluri Sitarama Raju, who attained martyrdom when he was a young kid. In RRR, Ram Charan plays Alluri Sitarama Raju. Jr NTR's Bheem Intro or Ram Charan's Ramaraju Intro - Which RRR Teaser Did You Like More? Vote Now.

The article mentions that Komaram Bheem was a guerrilla warfare expert, as aspect which some Twitter users, like the below, claim why Jr NTR is dressed as a Muslim. They believe he is dressed as that to trick the Islamic rulers.

While this could be a possibility, another argument could be made that Rajamouli want to make a statement on how Komaram Bheem is being portrayed in the wake of Hindu nationalism. He is being mentioned as a Hindu nationalist, because he fought against the Muslim rulers of his state. However, Poyam, in his article, begs to differ.

He wrote, "Many existing historical accounts about Komaram Bheem claim that Komaram Bheem was a nationalist ‘vanvasi’ (Hindu) leader who fought against the Nizam government. These narratives argue that Bheem’s resentment against Nizam was because of ‘Islamic’ oppression on Hindus and destruction of Hindu culture. When, Gond Adivasis are not even Hindus, how does Bheem become a Hindu icon leading the battle against ‘islamist’ oppression? Which part of Bheem’s history suggests that he endorsed to ‘Hindu’ religion or fought for Hindu rights? Gond people’s history provides us an entirely different story."

He further added, "It suggests that these claims are mere propaganda to associate Bheem into Hindu nationalist discourse by manipulating history. Bheem’s movement against Nizam was solely born out of ‘denial of basic Adivasi rights over land, recourses and demand for autonomy’. In his people’s imagination, he was only seeking to liberate his people from dikus (outsiders) and was fighting for justice and self-rule."

So by showing Komaram Bheem in an ethnic Muslim attire, is Rajamouli trying to veer him away from his newly perceived 'Hindu' leader image? Whatever the answer is, the teaser of RRR has certainly set the tongues wagging.

Like with his earlier film franchise Baahubali, RRR is also made on an exorbitant budget, reportedly for about Rs 450 crore! Bollywood stars Alia Bhatt and Ajay Devgn will also be part of the film, along with Hollywood stars Alison Doody and Ray Stevenson.

(The above story first appeared on LatestLY on Oct 22, 2020 09:32 PM IST. For more news and updates on politics, world, sports, entertainment and lifestyle, log on to our website latestly.com).