So, our question is simple to you. Which teaser did you like better? Was it Jr NTR's Bheem intro? Or was it Ram Charan's Ramaraju intro? 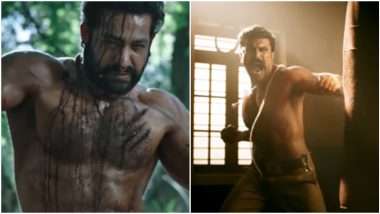 Everyone's waiting for SS Rajamouli's next film, RRR. The epic action-adventure stars Ram Charan, Jr NTR, Alia Bhatt and Ajay Devgn in key roles. Today, a promo for Jr NTR's character in the film named Bheem was unveiled by the makers. The prom was supposed to be coming out way earlier on his birthday, but was delayed for obvious reasons. The promo is breathtaking, with flawless CGI, wonderful locations and some cool action. Earlier, on Ram Charan's birthday, a promo introducing his character, Ramaraju, was unveiled by the makers. Bheem and Ramaraju are brothers in the film. Jr NTR Posts a Heartfelt Note to Fans After RRR Team Confirms His First Look From the Film Won't Release on His Birthday (Read Tweet).

So, our question is simple to you. Which teaser did you like better? Was it Jr NTR's Bheem intro? Or was it Ram Charan's Ramaraju intro? RRR Update: Makers Reveal Why They Could Not Release Ajay Devgn's First Look on His Birthday.

Ram Charan's teaser uses lesser footage from the film, which might be because only limited principal photography took place until March 2020. The glimpse of Ram Charan as a supposedly a police officer certainly is a delight for the fans. Of course, Jr NTR's promo had the luxury of the time. More footage was available by then. It also gives us the hint that his character, despite being named Bheem, maybe a Muslim man.

SS Rajamouli has refused to divulge many details about the film. The secrecy around the plot certainly creating a buzz. RRR, is rumoured to be period-drama. It might tell the story of two freedom fighters.

(The above story first appeared on LatestLY on Oct 22, 2020 02:30 PM IST. For more news and updates on politics, world, sports, entertainment and lifestyle, log on to our website latestly.com).