The RRR team finally unveiled Jr NTR's first look from RRR on October 22 and needless to say, it was worth all the hype. 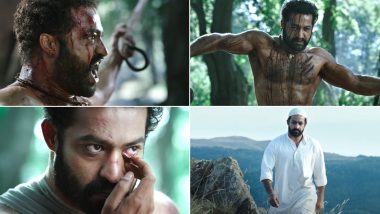 While the makers couldn't release Jr NTR's first look from RRR on his birthday, they did make up for the long wait. The team finally unveiled the actor's first look from RRR on October 22 and needless to say, it was worth all the hype. After introducing Ram Charan as Alluri Sitaramaraju, SS Rajamouli unveiled Jr NTR as a freedom fighter, Komaram Bheem and his bravura act has left us in awe of him. Charan had apparently dubbed in five languages to introduce his fellow co-star and share his first look from the same. From Saif Ali Khan in Adipurush to Ajay Devgn, Alia Bhatt in RRR: Looking at Bollywood Actors Who Will Be Seen in Regional Releases!

Jr NTR as Komaram Bheem looks fierce and his physique is to die for. His shirtless scenes command your attention. Going by his first look and the scenes in the video, we can assure you that Jr NTR would be a treat for your eyes in the movie and his stupendous performance will outshine all his previous acting ventures. The movie is making headlines for all the right reasons and besides being Rajamouli's immediate direction after Baahubali, the fact that Ram Charan and Jr NTR are collaborating for a period saga makes it even more intriguing. The actors will be joined by Alia Bhatt, Ajay Devgn and Olivia Morris in the movie. RRR: Ajay Devgn to Play Ram Charan – Jr NTR’s Guru in SS Rajamouli’s Period Drama?

For the ones who don't know, Komaram Bheem was a Telugu Indian tribal leader who fought against the Asaf Jahi Dynasty for the liberation of Hyderabad. RRR will revolve around their fight for freedom and make us aware of their struggles. Very little is known about these freedom fighters and we are glad for Rajamouli has chosen this subject to remind us of India's forgotten heroes.

(The above story first appeared on LatestLY on Oct 22, 2020 12:01 PM IST. For more news and updates on politics, world, sports, entertainment and lifestyle, log on to our website latestly.com).