Skylab Movie Review: Nithya Menen and Satyadev’s Rural Comedy on SonyLIV Isn’t As Funny as Its Quirky Setting Promises To Be! (LatestLY Exclusive)

Skylab is a Telugu comedy film written and directed by Vishvak Khanderao and is inspired by real-life events. The movie stars Nithya Menen, Satyadev, Rahul Ramakrishna, Tanikella Bharani, and Tharun Bhascker. Skylab had released theatrically on December 4, 2021, and is now streaming on SonyLIV. 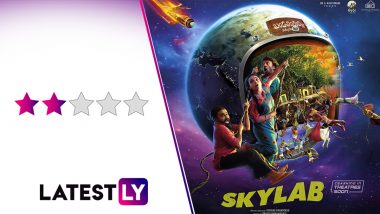 Skylab Movie Review: In 1979, Skylab, the first US space station launched by NASA, disintegrated in the atmosphere, and the hubris hurtled towards Earth, with several reportedly hitting different places including India. Since this was then considered a unique and unheard of occurence, the event was seen then with a mixture of excitement and fear. The Telugu film Skylab, written and directed by Vishvak Khanderao, revisits that incident to the purview of a village in Telangana called Banda Lingampally whose inhabitants fear the debris may hit them. Nithya Menen Birthday Special: From Mersal to OK Kanmani, a Look at Her Best Movies.

There are three principal characters who take advantage of the situation to improve their own. One of them is Gauri (Nithya Menen, also the producer), the fiesty, high-headed daughter of the local zamindar and aspiring journalist, who wants to use the 'deep impact' on the villagers as a story to impress her former employers. Then there is Anand (Satyadev), a smooth-talking wannabe doctor who comes to stay with his grandfather (Tanikella Bharani) and wants to start his clinic at a building that is considered cursed by the villagers.

He finds a gullible accomplice in Subedar Ramarao (Rahul Ramakrishna), a young man who is left in enough debt by his absent father. When their opening of the clinic is accused of being responsible for the Skylab disaster, Anand decides to trick the villagers by playing with their fears and earn money in the process, only things don't really work his way.

Skylab has an interesting plotline made even more so by the fact that it is inspired by a real-life incident. It begins with the tagline that it is based on fascinating stories that our parents refused to tell us. The problem is Skylab takes its own sweet time to get to that fascinating story itself. Nearly an hour is spent in establishing the village setting and the predicaments of the three main characters. Credit where due, Skylab does the setting really well, with the production design team doing a good job at that. The actors are also good - Menen, Satyadev and Rahul Ramakrishna slipping effortlessly into their roles.

It's just that establishing of their characters and how they play into the plot later take too much time as we wait for the village to realise its supposedly impending doom. And when it does, is also when the movie drops its title around the interval point. The Whistleblower Review: A Stellar Ritwik Bhowmik and an Impressive Sachin Khedekar Keep You Hooked In This SonyLIV Original Series.

Sadly, things only improve slightly after this point. How the three protagonists use the Skylab incident to their advantage spark some modicum of interest, but not enough to invest completely, with them taking predictable change of hearts later on. The humour is also only sparsely effective - I guffawed at the scene where two men are answering nature's call in the dawn, and one keeps talking about the arriving doom in a foreboding tone, before he slyly pitches his insurance sales call. It is unfortunate that Skylab didn't have more such scenes before wrapping the storyline in a feel-good manner where everyone in the village irons out their differences including allowing dalits to enter temples.

Maybe there is a message there, maybe we need an armageddon to sort out our problems in the country, but then we did see Don't Look Up a couple of weeks back that totally negates this thought. Yup, that's the world I live in. In comparison, Banda Lingampally in Skylab feels like a mythical fairytale setting.

- The Writing and The Humour Aren't as Impactful

Despite an unusual storyline rich with humorous possibilities, Skylab isn't as effective a satire as it should be. The setting is charming and the premise is whimsical, but the movie is let down by its haggard pacing and lack of sting in its humour. Skylab is streaming on SonyLIV.

(The above story first appeared on LatestLY on Jan 14, 2022 12:44 PM IST. For more news and updates on politics, world, sports, entertainment and lifestyle, log on to our website latestly.com).