Nithya Menen Birthday Special: From Mersal to OK Kanmani, a Look at Her Best Movies

To elaborate on the same here's picking five of her most powerful roles that continue to stun and fascinate us even today. Have a look. 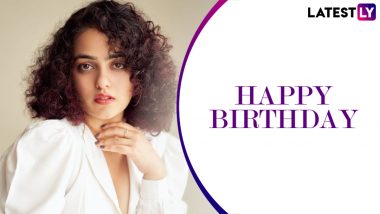 Nithya Menen who has ventured into Bollywood after dominating the regional cinema down South celebrates her birthday on April 8. A performer born to rule the silver screens, she's often praised for her acting proficiency. While Hindi audiences have seen her in Mission Mangal and Breathe: Into the Shadows, Menen has an array of powerful roles under her kitty. From starring in OK Kanmani, the film that had its Hindi remake in Ok Jaanu to Malini 22, where she portrays a rape victim seeking her revenge, Nithya has managed to impress critics with her diverse filmography. Ninnila Ninnila: A Smile! That’s What Nithya Menen Promises Fans With Her New Romcom.

To elaborate on the same here's picking five of her most powerful roles that continue to stun and fascinate us even today. Have a look...

Nithya played the role of Aishwarya, Vetrimaaran's wife who dies while delivering her second child in the hospital. Though limited screen presence, she managed to shine the brightest besides a powerful performer like Thalapathy Vijay. The movie directed by Atlee was a hit at the box office and we see no reason why the movie shouldn't be remade in Hindi.

A beautiful romantic drama that continues to make us smile even after so many years. Nithya plays the role of Tara who falls in love with Adi. But since they both don't believe in the institution of marriage, they decide to have a live-in relationship. A perfect romantic entertainer that will compel you to fall in love at least once in your life.

Nithya plays the titular role of Malini who marries a travel agent since she wants to settle in Canada. However, her happy life turns tragic when her husband's boss rapes her and leaves her scarred for the rest of her life. She then decides to seek her revenge. Nithya's performance was commendable in this one and she was able to lift the weight of the entire movie on her shoulders.

Another romantic drama starring Dulquer Salmaan and Nithya Menen (after OK Kanmani). Salmaan in here plays the role of Balan who falls in love with Sheela, the same girl whom he bullied in school. And while he gears up to ask her out, he realises she's already getting married and only believes in arranged marriages. Do they have a happily ever after? Watch the movie to find out.

Another Dulquer-Nithya starrer! The movie sees Dulquer as a chef who has studied in Switzerland who has a fallout with his father. Hence he decides to help his grandfather run his old restaurant. While he helps his grandfather resurrects his restaurant, he also becomes responsible and understands the importance of how a chef can feed people but only a good cook can feed hearts as well. Nithya in here plays his love interest who marries him and together, they successfully run the same restaurant.

Here's wishing this gem of an actor a very happy birthday and an eventful year ahead!

(The above story first appeared on LatestLY on Apr 08, 2021 09:00 AM IST. For more news and updates on politics, world, sports, entertainment and lifestyle, log on to our website latestly.com).