The Whistleblower Review: A Stellar Ritwik Bhowmik and an Impressive Sachin Khedekar Keep You Hooked In This SonyLIV Original Series (LatestLY Exclusive)

The Whistleblower is a series that should definitely be watched as a commentary on the medical entrance racket and for the performances. Just don't expect any of the twists and turns to shock you! The Whistleblower streams on SonyLIV. 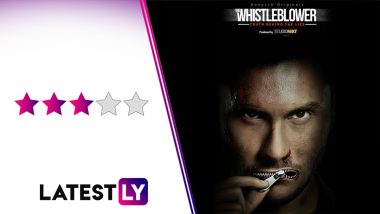 The Whistleblower Review: In recent times, SonyLIV has managed to deliver some incredible content through their original web-series. Be it Undekhi or Scam 1992 or a very experimental JL50, all have left us enamoured by the creativity behind their line-up. Guess that's why their shows makes you excited as good content is always tempting. In The Whistleblower's case, while the performances impress, the ordinary storyline leaves you tad disappointed. The Whistleblower Trailer: Ritwik Bhowmik’s SonyLIV Show on Examination Scam Is All Set To Release on December 16 (Watch Video).

Sanket (Ritwik Bhowmick) is a wily, free-wheeling and unapologetic young medical intern who does things for a kick. That also includes sitting for the medical entrance exam at the behalf of a son of a wealthy person. He is aided in the same by Jairaj (Ravi Kishan) who runs a nexus of the same. His father Ashwin Bhadoria (Sachin Khedekar) is a trusted and righteous dean of Reliable Hospital but that doesn't stop Sanket from continuing his activities with Jairaj. Despite the loss of his friend and someone very close, Sanket doesn't see error of his ways. But finally something happens and he decides to be the whistleblower.

Watch the trailer of The Whistleblower:

First things first, the writers have done an excellent job with Sanket's character. The way it is written is simply brilliant. The callous, defiant and remorseless manner in which the character has been drafted makes this series so damn fine. What's even better is the perfect casting of the character in Ritwik. He has understood his assignment just right, be it the angst or complete disregard for morals, he has aced every bit of the role.

Sachin Khedekar is a perfect antithesis to Ritwik. He is noble, kind, caring and believes in creating doctors based on merit. Khedekar does such a superlative job at it that you would want to give him a hug by the end of it.  Ankita Sharma does a remarkable job of an unassuming but observant girlfriend. It's refreshing to see Ashish Verma in a role other than a funny sidekick to a hero. The guy has potential and deserves more such content.

While the series is a slow-burner, these performances stop you from hitting the forward button as you peel the layers of the story through these characters. Ritwik Bhowmik Recalls Taking Tips from Naseeruddin Shah on How to Look Exhausted for a Shot.

The corruption in the medical entrance exams is intricately shown and executed which is interesting. But the sleepish pace  and the predictable writing antagonise you from the proceedings. Even when the clues are unearthed, they neither shock you nor leave you with any emotion. It's as if you knew where the clues are  and you just wait for them to be discovered. The predictability of the entire storyline robs it of its 'Wow' factor. It does pick up in the last two episodes when Sanket digs deeper but don't expect any fireworks.

Also, the use of Ritwik's voiceover to explain what we can already see on the screen is unnecessary. It doesn't take the story forward and is completely avoidable. In fact, it's quite distracting at times. A son not caring for his father's reputation is obvious in the scenes and doesn't need to be verbalised.

-unnecessary use of voice-over

The Whistleblower is a series that should definitely be watched as a commentary on the medical entrance racket and the performances. Just don't expect any of the twists and turns to shock you! The Whistleblower streams on SonyLIV.

(The above story first appeared on LatestLY on Dec 16, 2021 05:30 PM IST. For more news and updates on politics, world, sports, entertainment and lifestyle, log on to our website latestly.com).