It was a while back when it was reported that Parvathy starrer Varthamanam has been denied permission to be screened as it promotes anti-national elements. And now, as per the latest updates, the flick has been granted permission for relese by CBFC. Check it out. 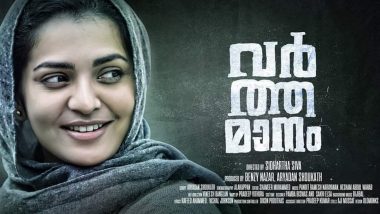 It was a while back when it was reported that Parvathy Thiruvothu starrer Varthamanam has been denied permission to be screened by the censor board for promoting 'anti-national' elements. However, here comes a piece of good news, as finally the said Malayalam film has been given a green signal by the Delhi Central Board revising committee. Reportedly, the movie is now slated for a February release. The makers confirmed this at a press conference in Kochi. Writer-producer Aryadan Shoukath termed this as a 'victory'.  Varthamanam: Parvathy’s Malayalam Film Denied Permission To Be Screened By Censor Board Due To ‘Anti-National Elements’.

Talking about Varthamanam, apart from Parvathy it also stars, Roshan Mathew and Siddique, and brings to light the current socio-political issues including the Muslim-Dalit discrimination at Jawaharlal Nehru University (JNU). Parvathy essays the role of a Keralite woman/student who moves to Delhi to be a part of JNU campus. The poster of the flick which was out in March 2020, saw her in a hijab.

Earlier, Aryadan Shoukath, a senior Congress leader and the film's scriptwriter and producer had told The News Minute, about the storyline of the film. “It is set against the Delhi campus of the JNU and the student movement there. It shows how all of them come together despite political differences and shows very secular ideas,”  he had said. Parvathy Resigns from AMMA as Her Protest Against General Secretary Edavela Babu's Comment on an Actress.

The film was earlier rejected for screening as a censor board member, V Sandeep Kumar had opposed it, "I saw the movie Varthamanam as a member of the censor board. The topic was the persecution of Dalits and Muslims in the JNU agitation. I opposed it. Because Aryadan Shoukath was the screenwriter and producer of the film. Of course, the theme of the film was anti-national," his now-deleted tweet read. All that being said, finally, the makers have won the battle and the film is cleared by CBFC. Stay tuned!

(The above story first appeared on LatestLY on Jan 06, 2021 02:39 PM IST. For more news and updates on politics, world, sports, entertainment and lifestyle, log on to our website latestly.com).