Produced by Vishal under the banner of Vishal Film Factory, the film was scheduled to be released in theatres on 26 January 2022, but got postponed to 4 February 2022. 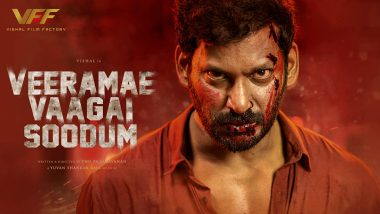 Veeramae Vaagai Soodum, the action thriller written and directed by Thu Pa Saravanan,  features Vishal and Dimple Hayathi in the lead roles. Produced by Vishal under the banner of Vishal Film Factory, the film was scheduled to be released in theatres on 26 January 2022, but got postponed to 4 February 2022. The film is receiving mixed reviews from critics for its writing, script, predictability, outdated plot and poorly written characters but the action sequences, performances and score are being praised.

Pinkvilla: "Veerame Vaagai Soodum is a crime thriller. It is similar to stories that we have seen and heard in various films already. But this one is quite different as the director made sure to write it in an interesting way. Though it seems to be a routine crime story in the beginning, once politics and politicians enter the scene, the story takes a lot of unexpected twists and turns. The interval comes with a bunch of murders coming together and connecting at one point. The second half is all about revealing the culprit behind all the crimes that happen. This shows the level that politicians can stoop to in order to keep themselves safe and earn name and fame in society."

Firstpost: "There is an effort to rationalise everything. I liked how the narrative tried to provide reason to the smaller moments and foreshadows it. But these do not plug in all the loopholes. The film wants to try something new but is not ready to let go of its dated cliches. Just like how it wants its hero to be a common man, but treats him like the garden variety cinema vigilante. The film argues that bravery is enough to win. But it is not enough to be bold; one also needs to be smart. Unfortunately, the film fails on that front."

Galatta: "Veeramae Vaagai Soodum is packed with solid action, but the content? Well, not so! An uninteresting action drama that is predictable, long, and flat! Vishal has delivered a fine performance and VVS is a zone that fits his body of work. Action has always been his forte and he excels in that aspect with this film as well. Raveena Ravi holds us with an emotional performance that is impressive, while Dimple Hayathi is wasted in a role that has no substance."

The News Minute: "Neither Yuvan’s background score nor the well-choreographed fights can save the film from devolving into a complete mess. It’s not only veeram you need to sit through it but also a good degree of masochism. Or the commitment to a job, like this reviewer. The film is full of inconsistencies and gaps in logic."

(The above story first appeared on LatestLY on Feb 04, 2022 11:05 PM IST. For more news and updates on politics, world, sports, entertainment and lifestyle, log on to our website latestly.com).