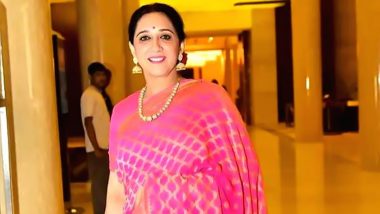 Aamir Khan's sister Nikhat Khan has joined the cast of the show Banni Chow Home Delivery. She commented: "I am excited to make my debut on the small screen with the leading channel of our country Star Plus." Nikhat has produced several projects including 'Madhosh' and also had been part of films such as 'Mission Mangal' and web series 'Special Ops 1.5: The Himmat Story' Pyaar Ka Pehla Naam Radha Mohan: Shabir Ahluwalia Is All Set to Play the Lead in the Upcoming ZEE TV Show.

On being part of the TV show, she shared: "It's an opportunity and an honour to make my place in the viewer's heart. Viewers will get to know more about my character as the show moves forward. I am excited for the viewers to love my role as the story develops." Vikrant Massey Birthday: 5 TV Shows Of The Actor That Made Us Fall For Him Even Before Lootera Happened.

The show is about the journey of a strong and fiercely independent young woman, Banni (played by Ulka Gupta), who runs a food delivery business where she cooks home-cooked meals for people who have moved to the city in quest of a job but miss home-cooked food. Ulka is cast opposite Pravisht Mishra, who would play a disabled character named Yuvaan. Banni Chow Home Delivery is starting from May 30, every Monday to Saturday at 9 pm on Star Plus.

(The above story first appeared on LatestLY on May 28, 2022 01:07 PM IST. For more news and updates on politics, world, sports, entertainment and lifestyle, log on to our website latestly.com).