Bhaag Beanie Bhaag is streaming on Netflix and it should be part of your weekend watchlist because it is an actually funny series based on stand-up comedians. Remember Netflix is free for the next two days! 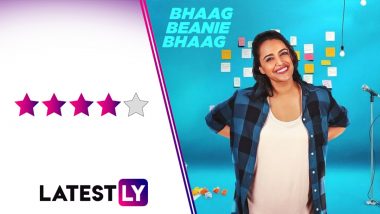 Bhaag Beanie Bhaag movie review: Every time I hear about a series with stand-up comedy as the theme, it leaves a sour taste. Both Hasmukh and Comedy Couple were anything but funny. So honestly, with Bhaag Beanie Bhaag too, I had similar expectations and I am so glad, I was proved wrong! BBB is a hilarious snack watch! ‘Bhaag Beanie Bhaag’ Cast on Comparisons with ‘The Marvelous Mrs Maisel’: Give the Show a Chance

Beanie Bhatnagar (Swara Bhasker) has a perfect life, at least the one that we are wired to consider as perfect. She is an MBA, earning well, dating a good rich guy, and has just been proposed for marriage. Everything is great, isn't it? But no! It dawns on Beanie who participates in comedy clubs in the night, that this is not what she wants. She would like to be a professional stand-up comedian and make people laugh. She runs away from her roka to her boyfriend of three years Arun (Varun Thakur) and messes up the comedy gig of the night as well. Was it wrong to pursue what you want to do? Beanie finds out and so does you.

Written by Nisha Kalra, BBB never ever loses the grip on what's happening. In fact, it's so close to reality, especially for women, that you will connect and identify with each one of them. Disgruntled dad reaching out to an astrologer to bring his wayward daughter back, a BFF who never minces words, all the hang-ups an Indian girl who has never really lived life on her own terms sticks to, Kalra is accurate to the T. Even the scene where Beanie is jealous that her ex has moved on to someone better and hotter is so real! That's why it is extremely important that movies or shows on women are written by women. Nobody understands us the way we do!

Yet another beauty of this show is, Kalra weaves the realities of our lives so cleverly with jokes that they don't come across as too strong but definitely leaves an impact. The scene where everybody Beanie's father is phoning tells him that she is an incredible talent, he is more concerned about whether she will get back with her ex to get married. That happens for real but Kalra and director Abi Verghese keep it light. You however get the point just right.

If that's not enough, the one-liners are to-die-for and the top honour goes to 'Problem wohi, ladki nayi' or 'Parents na kabhi khush nahi hote'. It's a tie of course. Beanie's father during a session with a therapist explains what he thinks IVF is. It's simply outrageously funny! Or during her set Beanie says to parents who are against their daughters pursuing their dreams, "FD to tudwa hi rahe ho, bail karwa dena."

It works that Beanie's sets are actually funny and don't pretend to be. There's one in the trailer as well where she explains how we women don't pee in public toilets, she had sex. Absolutely bang on! Thankfully they are actually funny which made me laugh out loud. Beanie's paranoia which makes her predict the worse about her future is the more identifiable version of what Uday Chopra does in the Dhoom series. Come on, that's a compliment!

Real stand-up comedians like Rahul Subramanium and Kaneez Surka make appearances but they are given such redundant screen-timing that it hurts. If real life characters are included in a series, due diligence should be paid to them just like Luck By Chance did. After all, the show is on them.

Check out the trailer of Bhaag Beanie Bhaag

As for performances, taaliyan bajti rehni chahiye for Mona Ambegaonkar and Girish Kulkarni. I wish my parents had even half a sense of humour as these two. All the best lines are saved for them and together they are on fire. Dolly Singh is apt for the role and her vibe with Ravi Patel is extremely funny. Patel, who is also the co-creator of the show, gets a few good lines too and does a good job of being the 'Other guy'. Coming to Beanie now, there is no doubt that Swara Bhasker is a fabulous performer and she does an amazing job here. But this time, the people around her managed to outshine her comfortably.

-too short a series

Bhaag Beanie Bhaag should be on your watchlist this weekend. It has just six episodes and leaves you with a smile and a feel-good feeling. Netflix is even free for the next two days!

(The above story first appeared on LatestLY on Dec 04, 2020 06:14 PM IST. For more news and updates on politics, world, sports, entertainment and lifestyle, log on to our website latestly.com).