Bigg Boss 14: Do You Think Sidharth Shukla’s Move of Saving Nikki Tamboli Over Jasmin Bhasin in the Immunity Task Was Right? VOTE Now

Bigg Boss 14 is back and how. In one of the tasks, Sidharth Shukla chose Nikki Tamboli over Jasmin Bhasin and we need to know what is your opinion on the same. Vote now! 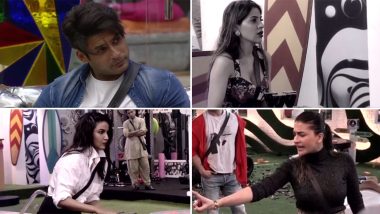 Bigg Boss 13 winner Sidharth Shukla is making quite a noise on Bigg Boss 14 as a mentor. From day one of the reality show, the hunk has been very much vocal inside the house. On October 8 episode, we also saw him getting into a verbal spat with contestant Shehzad Deol for Nikki Tamboli. Sid also has been receiving a lot of backlashes online for saving Nikki over Jasmin Bhasin and Pavitra Punia in the beach cafe task. As per the task, the girl with the maximum number of drink in her glass would win immunity from nominations. However, as Shehzad ruined Tamboli's tray and glasses, the latter went on a rampage. Bigg Boss 14 Preview: Nikki Tamboli Emerges as a Strong Player in the Immunity Task; Rubina Dilaik Argues With Hina Khan Over a Pair of Shoes (Watch Video).

At the end of the beach task, it was only Jasmin Bhasin who actually had a tray in her hand. But during the decision making time, Sid chose Nikki over the other two. Before the verdict, Bhasin had also argued that it was she who deserves the win, but sadly that did not happen. Shukla's this soft side or favouritism for Nikki has been given a thumbs down by many. Bigg Boss 14 October 8 Episode: From Nikki Tamboli Winning Immunity to Gauahar, Sidharth Complaining About Rubina, 5 Highlights of Day 5 From BB14.

Well, we want to know what do you think about Sid's this decision? Do you think he did the right thing? Do you feel Jasmin Bhasin should have been the winner instead of Nikki? Let your voice be heard. Also, after the beach cafe task, Sidharth had lashed out at Deol for dragging himself unnecessarily in the task. Vote now.

Do You Think Sidharth Shukla Was Right In Picking Nikki Over Jasmin?

(The above story first appeared on LatestLY on Oct 09, 2020 09:40 AM IST. For more news and updates on politics, world, sports, entertainment and lifestyle, log on to our website latestly.com).