Bigg Boss 14 is getting interesting with each passing day. And tonight, we will see Nikki Tamboli as a fierce performer and Rubina Dilaik arguing with mentor Hina Khan. Check it out. 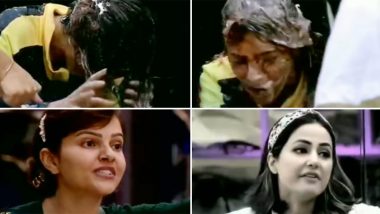 Bigg Boss 14 is providing the right kind of masala. Why do we say this? As the house is going to be on fire tonight. Right from Nikki Tamboli's be wow performance to the clash between the bahus, it's going to be a content filled episode. As per the preview clip, we first see Nikki and Pavitra Punia arguing wherein the former accuses her of fighting with Rahul Vaidya for cameras. Tamboli also screams at Punia for being abusive towards Vaidya. Cut straight to scene two, we see Rubina Dilaik and Hina Khan locking horns over luxuries amenities. Bigg Boss 14 October 8 Episode: From Nikki Tamboli Winning Immunity to Gauahar, Sidharth Complaining About Rubina, 5 Highlights of Day 5 From BB14.

As seen in the video, Rubina argues with Hina that if one pair of shoes is counted as an item, then why can't a salwar kameez also be taken as one item. Dilaik also tags the seniors as brainless. If this drama was not enough, Nikki Tamboli emerges as one of the strongest players in the immunity task wherein even after seeing her makeup getting ruined she does not go uff. Bravo!!  Bigg Boss 14: Aly Goni Has the Sweetest Reaction for Rumoured Girlfriend Jasmin Bhasin's Task to Impress Sidharth Shukla.

Check Out Bigg Boss 14 Preview Below:

Tomorrow's Precap . Kindly Watch These Episodes On COLORS TV everyday and Before Television On VOOT Select ! Disclaimer : **FAIR USE** Copyright Disclaimer under Section 107 of the copyright act 1976, allowance is made for "fair use" for purposes such as criticism, comment, news reporting, teaching , scholarship, education and research. Fair use is a use permitted by copyright statute that might otherwise be infringing. Non-profit, educational or personal use tips the balance in favour of fair use . . . Follow @bb14.videos for Exclusive Videos , Pictures & Unseen / Undekha Content ! . . #jaankumarsanu #jasminbhasin #rahulvaidya #shehzaddeol #nikkitamboli #nishantsinghmalkani #rubinadilaik #pavitrapunia #abhinavshukla #eijazkhan #saragurpal #hinakhan #gauharkhan #sidharthshukla #biggboss14 #biggboss

In the current season, the girls inside the house seem more powerful and opinionated than the boys. Until now, fans are liking Nikki's drama as well as Rubina's adamant nature. The Shakti actress tackles things in her own way and that what is making her unique from the herd. Are you excited for tonight's episode? Tell us in the comment section below. Stay tuned!

(The above story first appeared on LatestLY on Oct 09, 2020 08:37 AM IST. For more news and updates on politics, world, sports, entertainment and lifestyle, log on to our website latestly.com).