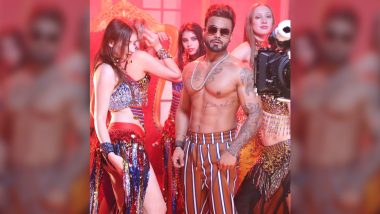 Bigg Boss 13 really brought out the Punjabi vibe with not one but two well known Punjabi industry faces - Shehnaaz Gill and Himanshi Khurana. And while singer Sara Gurpal has reportedly been brought on-board for this year's Bigg Boss 14, another singer, Indeep Bakshi, who is known for his hit songs "Saturday Saturday" and "Kala Chashmah" has also been approached to get locked in the Salman Khan hosted show. Mujhse Shaadi Karoge: Shehnaaz Gill Sheds Tears On The Show Because of This Contestant, Here's Why (Watch Video).

When asked Indeep confirmed the news and said, "Yes, I have been approached for Bigg Boss 14 but I can’t give any update on it". Well, it can be recalled that Indeep was also one of the suitors for Shehnaaz Gill in her swayamvar show Mujhse Shaadi Karoge. Bigg Boss 14: Aly Goni Rejected Salman Khan's Show for Digital Debut With Boney Kapoor?.

In fact, inspired by Shehnaaz from his MSK stint, Indeep even came up with a song which has been inspired by her. Revealed Indeep, "When I came back from the show Mujhse Shaadi Karoge, many fans were calling me Shehnaaz ka Saiyaan. So, I picked a word from there and came up with an amazing song".

"I would love to collaborate with Shehnaaz in the future. She is an amazing singer, and her voice will do really great in party songs which is my speciality,” concluded Indeep, expressing his wish to work with the Punjab ki Katrina Kaif, who has now become a darling after her cutesy sting in BB13.

(The above story first appeared on LatestLY on Sep 18, 2020 09:46 PM IST. For more news and updates on politics, world, sports, entertainment and lifestyle, log on to our website latestly.com).