At times the controversial reality show Bigg Boss gets predictable and as we thought Sonali Phogat is the latest contestant to get eliminated from the show. If reports are to be believed she is the one out of the house. Read on. 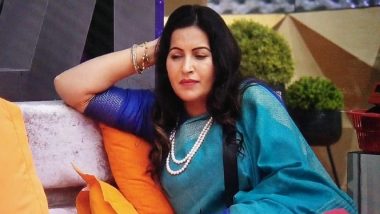 At times the controversial reality show Bigg Boss gets predictable and as we thought Sonali Phogat is the latest contestant to get eliminated from the show. Yes, you read that correct! As reported by The Khabri, she has been out of the house. Owing to fewer votes, she had to say goodbye to BB 14. This week four contestants were nominated Rubina Dilaik, Nikki Tamboli, Sonali Phogat and Rahul Vaidya. And of course, it was kind of expected that considering the popularity and overall performance, it was the actress-politician's turn to get evicted. Bigg Boss 14: Sidharth Shukla Makes an Entry, Grills Rahul Vaidya for Constantly Attacking Abhinav Shukla (Watch Video).

It was from the past few days, that Sonali was making headlines for creating ruckus inside the house. Her fight with Rubina to the latest throwing a paratha in the dustbin, she was trying her best to be seen. Not just that, contestants had also complaint about Phogat allegedly threatening them on national TV.  If all this was not enough, the lady also had confessed that she has feelings for Aly Goni. Bigg Boss 14: Jasmin Bhasin To Re-Enter Salman Khan's Reality Show For Aly Goni?

Well, even after this, Sonali could not survive in the game and has been reportedly gotten evicted from the show. Not just that, this week Salman Khan is not shooting for Bigg Boss 14 Weekend Ka Vaar and so we feel guest Sidharth Shukla will announce the elimination. Coming back to Sonali, her journey on the show was just fine. Stay tuned!

(The above story first appeared on LatestLY on Jan 24, 2021 12:52 PM IST. For more news and updates on politics, world, sports, entertainment and lifestyle, log on to our website latestly.com).