Sunday's Bigg Boss 14 Weekend Ka Vaar is going to get extra-special as Sidharth Shukla is going to make an entry inside the house and grill the contestants. Sid's entry is going to be fun and filled with a lot of revelations. Have a look! 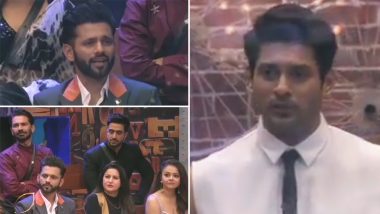 Bigg Boss 14 is getting entertaining and we ain't joking. The reality show which started on a boring note is now turning into a visual treat. Having said that, yesterday's (Jan 23) episode saw reporters entering inside the house and grilling the contestants one by one. The journos did not leave a chance to unmask the real game of the inmates. Now moving on, tonight's (Jan 24) Weekend Ka Vaar episode sans Salman Khan will be special as Bigg Boss 13 winner Sidharth Shukla will make an entry. Bigg Boss 14: Jasmin Bhasin To Re-Enter Salman Khan's Reality Show For Aly Goni?

As per the promo released by the makers, we see Sidharth asking Rahul Vaidya some tricky questions, which the singer seems unable to answer and justify. The Broken But Beautiful 3 star enters and quizzes Vaidya about the winner quality he has and Abhinav Shukla doesn't? To which Rahul gets puzzled and replies that he is unable to analysis. To which, Sid says that if he can't tell him his positive points, why is he behind Abhinav all the time. Woah! Bigg Boss 14 Weekend Ka Vaar Preview: Rubina Dilaik and Rakhi Sawant Dance on ‘Dola Re Dola’; Rahul Vaidya Gets Grilled by the Journalists (Watch Video).

From day one, Rahul and Abhinav have never bonded. Whenever the singer has attacked the latter, both have engaged in a verbal war. Also, a few days ago, Rahul had also tagged Abhinav as 'Halka Shukla' comparing him to Sidharth Shukla. Well, we feel Sid's entry is going to be fun and filled with a lot of revelations. Stay tuned!

(The above story first appeared on LatestLY on Jan 24, 2021 10:09 AM IST. For more news and updates on politics, world, sports, entertainment and lifestyle, log on to our website latestly.com).