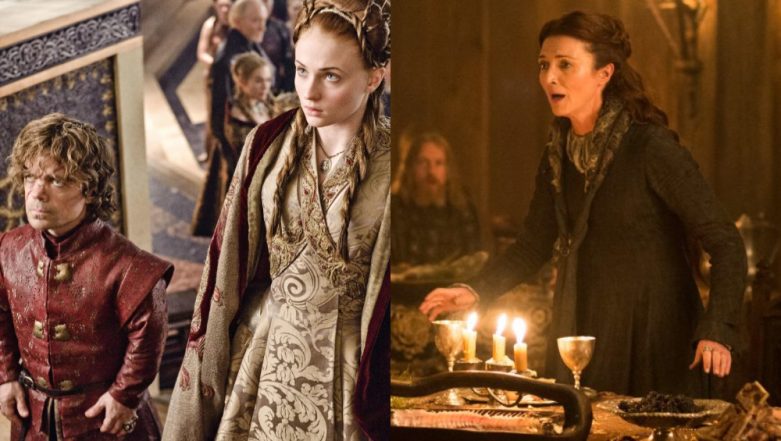 The third season of Game of Thrones was a turning point. With the unprecedented success of the first two seasons, HBO had realised the full potential of the series. The sharp turn in production value can be very well noticed here onwards. Game of Thrones season 3 featured 10 episodes. The story is based on A Storm of Swords, the third book in the A Song of Ice and Fire series by George R.R. Game of Thrones season 3 spans over a few months in the autumn, with winter just around the corner. The civil tension is at all time high with the death of one of the Five Kings - Renly Baratheon. Game of Thrones Season 1 Recap: From Jon Snow's Decision to Join Night's Watch to the Death of Beloved Ned Stark, Here's All that Happened.

While Jon Snow is trying to infiltrate the wildings, Robb Stark has accepted his responsibilities as the successor, coming to be known as the King of the North.

Daenerys travels to the city of Astapor to purchase an army of highly skilled warriors called the "Unsullied. She's almost killed there but ends up making a new friend. Arya Stark is captured by Brotherhood without Banners. ‘Heartbroken and F**ked Off’: Lena Headey Aka Cersei Lannister Laments as She Misses out Game of Thrones 8 Premiere.

Samwell Tarly is the only at the beginning of season 3 who truly understands the threat that is the Night King's army. New alliances are formed - Jamie and Brienne strike a chord, while Varys and Tyrion also seem to be becoming friends, by episode 4.

Jaime's right hand is chopped off by Roose Bolton's man, Locke. This happens after Jaime protects Brienne from being raped.

Daenerys pretends to trades one of her three dragons for the army of Unsullied soldiers. After the trade, she orders the dragon to burn the leaders. She gives the unsullied to fight for her or not.

Robb Stark makes the most foolish decision of all. He tried to make amends with Walder Frey despite the fact that he broke the promise to marry one of his daughters. Meanwhile, Jon, Ygritte, and the wildlings climb the wall to defeat the night's watch. Also, Jon falls in love with Ygritte, the wilding.

Sam and Gilly learn that white walkers can be killed by dragonglass after successfully defending them against a white walker. Tyrion Lannister and Sansa Stark get married in episode 8.

Episode 9 is where it all leads to. The Red Wedding. Bran arrives at the wall and learns that he has magical powers to enter someone else's mind. Robb's uncle married Frey's daughter, but during the wedding, the Starks are brutally murdered. Talisa, Robb, and Catelyn are killed.

Arya witnesses a part of what happened the red wedding and is taken to a safe place. Theon's sister takes a fleet of ships to go recapture him from his torturers. Sam warns Castle Black about the white walkers. Ramsay Bolton, Roose’s bastard, castrates Theon. Jon betrays Ygritte. She is unable to kill him for she still loves him. Dany's name becomes more popular across the kingdoms.