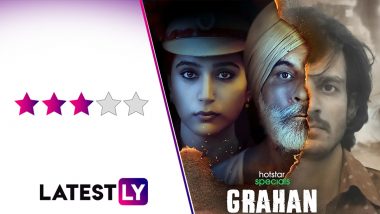 Grahan Review: Hotstar's new series, Grahan is based on author Satya Vyas' acclaimed Hindi novel, Chaurasi. The novel and the series is based on a police officer's investigation of an episode in the 1984 Sikh riots. Grahan begins in 2016 in Jharkhand, where Amrita Singh (Zoya Hussein) is investigating the murder of a journalist, and she is disillusioned by how her higher-ups are trying to hush it up as a suicide. SGPC Demands Ban on 'Grahan' Web Series on 1984 Anti-Sikh Riots.

On the recommendation of the CM, Amrita is assigned to lead an SIT investigating the 1984 riots that happened in Bokaro, where Sikhs were massacred by an angry Hindu mob. The CM wants to implicate the opposition leader, Sanjay Singh (Teekam Joshi) - an trade union leader then - who was accused of instigating the riots in the town.

While looking at the case files and the pictures of the rioters, Amrita is shocked to find one of the rioters, Rishi Ranjan (Anshuman Pushkar), happened to be her own kindly father Gursevak (Pavan Malhotra), who is now a Sikh. Thereon, the series shifts between two timelines - in 1984, when a young Rishi meets and falls for a lovely Manpreet (Wamiqa Gabbi) and what circumstances turned him into a rioter, and in 2016, where Amrita is finding out the truth of what happened that fateful night.

The controversy surrounding Grahan is a classic example of people jumping the gun before even getting to see what exactly they are outraging for. For the last couple of days, there has been this negative campaign against the series that it is showing Sikhs - already under constant scrutiny for the ongoing farmers' protest - in a bad light. The trailer can be blamed for giving out the idea that a Sikh man was responsible for the riots. There have been frantic PR calls to avoid mentioning the 1984 riots in our stories, which is funny, because that part of our turbulent history is exactly what the series is based on. 1984 Riots Victims Send Legal Notice to Makers of Web Series 'Grahan'.

Ah, only if the outrage-rs could have given the series a chance! Look, Grahan has quite a few flaws, but that has more to do with its narration. As for the portrayal of Sikhs during the 1984 riots, without spilling any SPOILERS, I believe that Grahan has showed them for what they were - victims of a targeted hate campaign. In fact, Grahan is a show that deserves to be seen in the present times for trying to show how deep the communal tentacles have entwined us, how politicians continue to make us fight for the sake of mere votes. How we are always on the verge of another disastrous genocide. How things have not really changed for the ostracised even when we are kept being told of 'India Shining' and 'achche din'. Is it a coincidence that the name of a police officer, who belongs to a lower caste happens to be Vikas? Or is there more to that nomenclature than what meets the eye?

There is a scene in the series where the same Vikas (Sahidur Rahman), who is Amrita's SIT subordinate, asks a former, now repentant rioter Guru, effectively played by Chichhore fame Saharsh Shukla, about what they got from the bloodshed. Guru replies solemnly that the violence gives them a temporary sense of power, of control that they can do anything, only for them to later realise that it is all a lie. It is a haunting scene, well performed and well-written. Actually there are some very effective dramatic moments from episode 4 onwards, when Amrita and Vikas get the survivors of the riots to recollect their trauma. It is from this point that Grahan truly gets to you.

The first three episodes, however, are sluggish in pacing (pacing is an issue throughout, but felt mostly in the initial episodes). The dramatic moments are good and the acting of the main cast, excellent, but the screenplay doesn't really get you till the fourth episode arrives.

I also have an issue with the casting. It's okay to have two different actors to play Rishi/Gursevak, but Pavan Malhotra's makeup makes him feel older than a couple of other main characters who appear in both the timelines, when he should have looked younger than them. Especially considering that those characters are played by the same actors in both the timelines. Also, the series at times feels heavily inspired. Gursevak's refusal to talk about why he was involved in the riots and the final courtroom sequence feels a little inspired by Veer Zara. Also, I can't help but recall Shonali Bose's debut film, Amu, that came out in 2005, which had similar themes and plotlines, and was also set against the 1984 riots. Hmmm... Amrita is also called Amu in the series, BTW. Tribute, maybe?

Most of the major twists are predictable, but Grahan truly shines in the dramatic moments in between, be it the scenes between Amrita and Gursevak (that name is a spoiler in a sense), or when characters reminisce their horrific past. The violence isn't overdone, as some of the series of today does to make a point, and yet the depiction leave a gruesome impact.

The main cast is wonderful, from the supremely underrated Zoya Hussein to thespian Pavan Malhotra (his breakdown scene to Amrita, and the courtroom scene are excellent displays of his histrionics). Anshuman Pushkar (recalling Amitabh Bachchan from his angry young man days in his looks) and Wamiqa Gabbi's earnest performances make their (weak) love story somewhat worth rooting for. Sahidur Rahman is another fine talent to watch out for, the scene where he recollects his own horrific past is well-done. Teekam Joshi is effective as the antagonist. Also a special mention to that haunting theme score.

- Effective Dramatic Moments and Performances of the Main Cast

- Gets Better After Episode 4

- A Message That Deserves to Listened To

Grahan is not at all a propaganda piece, rather it is a series that pays a painful ode to the victims of one of the worst riots in the last 50 years of our history. It is sluggish at times, and predictable too, but Grahan shines the best in its well-performed dramatic moments. Grahan is streaming on Disney+ Hotstar VIP.

(The above story first appeared on LatestLY on Jun 24, 2021 01:54 PM IST. For more news and updates on politics, world, sports, entertainment and lifestyle, log on to our website latestly.com).