This is not the first film to talk about sexual harassment, rape or consent and especially victim-blaming given that Taapsee Pannu's Pink did it years ago. 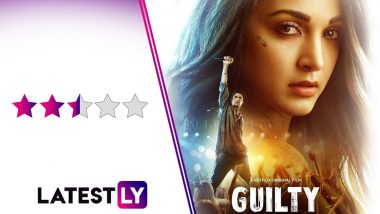 Guilty Review: International Women's day is right around the corner and unfortunately, like retail brands introduce shopping sale for women, this is also the time when most filmmakers and producers want to drop their women-empowerment, women's issues related content. Just a week after the short film Devi, starring a host of mainstream actresses released, comes another film, this time a Netflix original, Guilty is here. What's common between both films you ask? Both deal with crimes against women, sexual abuse in much different ways of course. As for Guilty, this comes from the digital wing of Karan Johar's Dharmatic and one can truly see the Dharma hangover all over it. Themes of class-divide that have always been a part of Karan's stories, be it the middle-class Anjali falling for the London-return Rahul from an elite family or Tiger Shroff and Sidharth Malhotra's 'misfit' scholarship students in the SOTY franchise. The same repeats with Guilty, except things take a dark turn here and hence the topics of privilege and background are more crucial here. For Kiara Advani, Eclectic Electric Blue and Bewitching Black, It’s a Slay Mode On for Guilty Promotions!

Guilty is set in an elite Delhi University college St Martin's where Kiara Advani's Nanki Dutta is a songwriter for a band named Doobydo (Yes! that pun is expected to be clever given that Advani gets a dialogue "pass me the doob") which also consists of her boyfriend VJ (Gurfateh Singh Pirzada). But there's also another girl, Miss Dhanbad, Tanu Sharma (AAkansha Ranjan Kapoor) who is vying for VJ's attention and badly wants him to end up with her. Although complications hit for this triangle on Valentine's Day after Tanu accuses VJ for raping her, years later when the #MeToo movement has received momentum. In the course of the film, the movement gets mentioned several times in all contexts, pretty much the way it actually did after victims started to call out their predators. "So and so got MeToo'd" becomes a lingo and Nanki doesn't take it seriously until her boyfriend is accused of it. Fashion Face-Off: Kiara Advani or Diana Penty in Akanksha Gajria Sari? Who Aced the Sexy Saree Vibe?

This is not the first film to talk about sexual harassment, rape or consent and especially victim-blaming given that Taapsee Pannu's Pink did it years ago, did it far too well. Although, this does set itself apart for becoming a first of sorts to look at the before and afters of MeToo though unfortunately, it doesn't take the efforts of digging deeper because it's too busy setting up suspense relating to the case. It loses its way while trying to add crowd-pleasing tactics with a hackneyed plot. What's sad is that the whole accused filing a defamation case against the accuser and its complications given that the accuser has not filed a police complaint needed a better execution because that is a point worth looking into. Instead, the makers settle for Taher Shabbir's lawyer, Danish joining the dots to a case with VJ, Nanki and their band member's accounts of the said night.

The angles of the upper-class privilege of the accused weakening the case for a small-town-hailing accuser keep coming back and are relevant enough for a society like ours. Though I'd have to say the run-of-the-mill representation of a small-town, scholarship-approved-girl, Tanu Sharma is simply disappointing. We could have had Tanu sporting the same look, being the open-about-her-desires kind of a girl without the forced vernacular accent. But stereotyping doesn't just limit to her, it's also Kiara's Nanki who's a Faiz-loving songwriter having multiple body tattoos and who constantly keeps changing the colour of her hair who comes across as a big cliche. Think-out-of-the-box people! It's Netflix for god's sake.

Check Out the Trailer Of Guilty Here:

Guilty with its 2-hour run-time does slump every now and then, especially in its last half. So as to not give away the ending, I'll refrain from talking much about the climax but let's just say it takes a highly predictable turn. Again, not going into details but Danish's (Taher) character arc is so predictable since the beginning that I was secretly hoping to be proved wrong. Ruchi Narain's direction is good though, her choice of locations, like Danish's office with the steely calmness, reflect much in his personality. The college bits too are done well although I have to say, the makers must add a trigger warning at the start of the film given the sensitivity of the topic. The music could have been incorporated in a better manner too.

Kiara Advani is currently Bollywood's 'it' girl given that she has some of the plummest projects in her kitty and while many complained about her demure act in Kabir Singh, Guilty may fetch her some good reviews. The actress is much better than what we have seen pull off before and has done the emotional bits particularly well.

Akansha Ranjan Kapoor holds your gaze with her Tanu Sharma act. Even as one may say she's overdoing it, I could give her the benefit of doubt and say that it's because her character is written that way. Among the men, Gurfateh Singh Pirzada has a massive Vicky Kaushal hangover. His style of talking resembles a lot to the Uri actor and due to writing limitations for his character, we don't get to judge much of his act.

Guilty tries to be a Pink for a more recent time but fails to match the intelligence of it. The film seems to be a missed opportunity about the MeToo movement and its effects. As the makers try to push for a film that consists of suspense, messaging via monologues and also on commentary on slut-shaming, victim-blaming, it doesn't quite achieve the right balance. Guilty makes its presence felt in parts and I'd recommend it as not a great film but an attempt, of course, with a trigger warning for victims of sexual abuse.

(The above story first appeared on LatestLY on Mar 06, 2020 08:58 PM IST. For more news and updates on politics, world, sports, entertainment and lifestyle, log on to our website latestly.com).