Gurmeet Choudhary and Debina Bonnerjee Recall Their Ramayan Days, Drop a Bomb on WHY They Decided To Never Work Together Again (Scoop Inside) 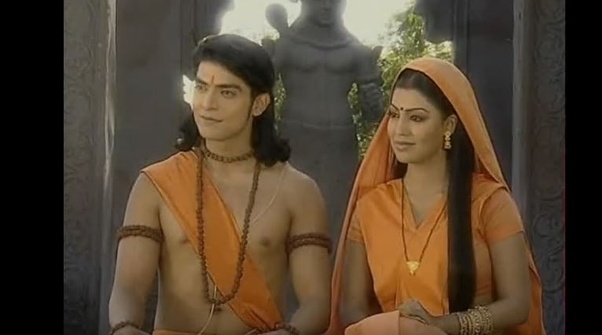 Ramanand Sagar's son Anand Sagar was the second person to remake Ramayan in 2008 for NDTV Imagine. He signed on actors Gurmeet Choudhary and Debina Bonnerjee to play Ram and Sita in the show and just like the Arun-Govil-Dipika Chikhlia version, this Ramayan too struck a chord with the audience. In fact, it was on the sets of Ramayan that the reel-life Ram and Sita fell in love and got married. And while fans of the actors want to see them together on-screen, that will not be happening. Ram Navami 2020: Arun Govil, Gurmeet Choudhary, Ashish Sharma, Hunks Who Played Lord Ram on Television.

In a recent live session with Bollywoodlife, Gurmeet and Debina went on to reveal that it was on the very sets of Ramayan where they fell in love, they had decided to not work together anymore. Yes, you read that right.

Gurmeet revealed in the session, "Since we (Ram, Sita, and Laxman) were shooting for the vanwas sequence, we were required to roam in the jungle. At that time, there was a fight going on between me and Debina. So, there were no dialogues in the scene and it was a very long shot, where we (Ram, Sita and Laxman) were supposed to walk in a straight line. Our mics were on and Debina was continuously telling me to walk slowly." Gurmeet Choudhary Throws a Birthday Bash for Wife Debina Bonnerjee; Arjun Bijlani, Karanvir Bohra, Prince Narula and Others Attend the Party – View Pics.

Debina added, "Gurmeet was walking extremely fast and there was a huge gap between him and me. Our director scolded me and asked to walk fast just because he was doing the same."

Gurmeet then said, "This was for the first time when Ram and Sita were fighting. Ankit Arora, aka Laxman, who was our co-star, was constantly requesting us to stop fighting. And our mic dadas were laughing out loud." TV Couple Gurmeet Choudhary and Debina Bonnerjee to Unite for a Short Film, 11 Years after Ramayan.

Debina then concluded by saying that even though they had many memories of shooting for Ramayan together, they had then sworn to never work with each other, adding that they fought too much. Well, but you guys did Nach Baliye... so guess that that particular door isn't entirely shut??