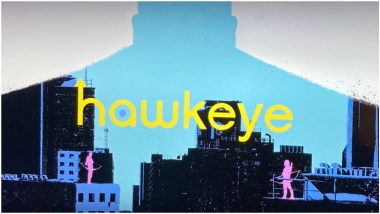 Hawkeye Episode 5 Review: As a series, Hawkeye has been a very uneven show for me in its five-episode run till now. There are a couple of episodes I truly liked, with the third one being the best of the lot, there are a couple that disappointed me very much, like the fourth one. Episode 5 titled "Ronin" is, thankfully, one of the better ones in the Disney+ series, even if it doesn't reach the same scale as the third episode. Before I go ahead with my review, I have to say there would be some SPOILERS ahead. Hawkeye Episode 4 Recap: From Black Widow to the Secret Rolex Watch, 6 Plot Twists From the Fourth Episode of Jeremy Renner’s Disney+ Show.

Have to say that Episode 5 starts off with a BANG, or rather a Snap, as we get a true idea of where Yelena (Florence Pugh) has been upto in the past five years. If you hadn't got that hint enough - Look no beyond Natasha's depressive face in Avengers: Endgame  - she was also a victim of Thanos' Snap while rendezvousing with a former Black Widow operative. If through Teyonah Parris in WandaVision, we got a closer insight of how a Snapped person returned to the world of living, then through Yelena here, we get an even more intimate POV of they felt when they got Snapped and then returned for what is matter of mere seconds for them, but five years had lapsed by then. Truly, a superb opening sequence that hooks you in instantly!

If you have stayed till the end-credits of Black Widow, you know that Yelena had been given a kill-mission to finish off Hawkeye (Jeremy Renner), for his Ronin activities. She is also angry with him, as she believes he is responsible for her sister's death. Towards the end of this episode, we know who hired her to do so through Valentina Allegra de Fontaine, the latter sadly not getting a mention here.

Of course, Florence Pugh and her accent are the major highlights of this episode, that does give fans quite a lot to cheer. The table conversation between Yelena and Kate (Hailee Steinfeld), where the former obsesses over her own cooking of mac-n-cheese and insisting on calling the latter by her full name, is really, really good and well-performed by the two actresses. I know this has become a cliched hope casting, but I do want to see them teamed together for a future movie or series. What I really didn't get is why Yelena would warm up to Kate, sort of, I mean, to reveal a big secret near the end of the episode. Especially after warning her to stay out of her way. Hawkeye: Florence Pugh Blocked on Instagram for Sharing Screenshots of Her Cameo, Says ‘Beyond Ridiculous’,

Clint Barton, meanwhile, has had it with his past sins and want to end it once and for all. He decides to confront Maya Lopez (Alaqua Cox) on his own so that he can warn her off and also reveal to her an unknown twist about the night her father killed. It might come off as a surprise to Maya, but it is a plot twist that we could easily deduce miles away. Ronin might be a killer, but he can't really go that dark, huh? Also, if you think that Clint and Kate really parted ways at the end of the last episode, you haven't seen much Marvel stuff, have you?

And if you are one of those who believed that Kate's mother, Eleanor (Vera Farmiga) was shady - why would you even cast such a good actress for a mother role if the role doesn't have any hidden dimension to it - you are quite right. We get to know who she really works for. Towards the end of the episode, yes, we finally get to see who the 'Uncle' is, the man for whom Maya works for, and Clint is apprehensive of. It might not come off as a surprise now, but yeah, Netflix's Kingpin aka Wilson Fisk (Vincent D'Onofrio) has now entered Disney+ Hotstar. Oh wait, that's just the pic!

Hawkeye gains more strength with its fifth episode with Florence Pugh's Yelena continuing her solid run from Black Widow, the repatriation of Clint-Kate's bonding and the first glimpse of Kingpin... well, sort of! Hawkeye is streaming on Disney+ Hotstar.

(The above story first appeared on LatestLY on Dec 15, 2021 03:03 PM IST. For more news and updates on politics, world, sports, entertainment and lifestyle, log on to our website latestly.com).