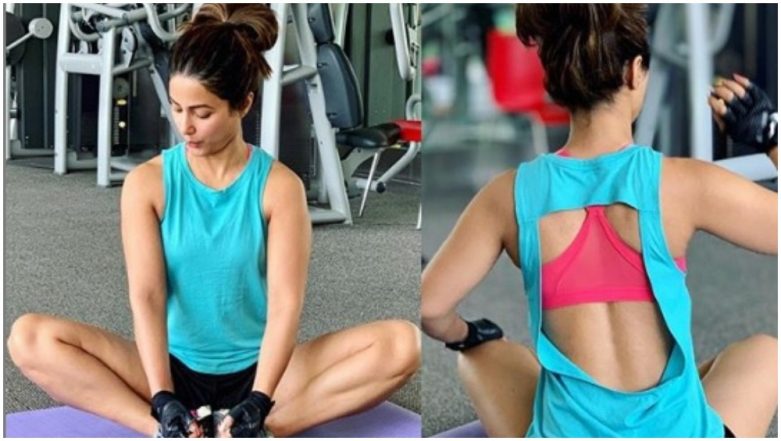 Yeh Rishta Kya Kehlata Hai fame Hina Khan, who garnered even more popularity with her stint in the eleventh season of the controversial show Bigg Boss 11, is currently seen is currently seen essaying the role of the vamp character of Komolika in Ekta Kapoor's popular show Kasautii Zindagii Kay 2. The actress, who has amassed huge fanbase with her super hit daily soap, is quite a social media sensation and never misses a chance to update herself well on social networking sites. Hina Khan Continues to Shoot ‘Kasautii Zindagii Kay 2’ despite Back Injury, Says ‘No Pain, No Gain’ – See Pic

Hina, who is a fitness enthusiast, had recently sprained her neck while working out in the gym. However, the actress has a good news for her fans as she has finally recovered from her neck injury. In fact, Hina also took to her Instagram stories to inform that she is finally hitting the gym after a long, long time. Well, the 31-years old actress believes in staying fit and healthy but does not follow the route of dieting. Hina Khan Sets Runway on Fire in a Peach Bridal Avatar at Bombay Times Fashion Week - Watch Video

Also, Take a Look at This:

No matter how you feel,get up, dress up, Go to gym,sweat it out, look hot and flaunt your gym wear 😂 And never Give up.. So my Gym swagger is on point😬 #GymFashion #FitGirlAreTheHottest #GymSwagger

On the professional front, Hina Khan, who is currently seen essaying the role of the vamp character of Komolika in Ekta Kapoor's popular show Kasautii Zindagii Kay 2, is gearing up to make her Bollywood debut in a film, where she will be seen sharing the screen space with veteran actor Farida Jalal. As per BollywoodLife report, the actress' project is going to be in a women-centric film, which will be directed by popular filmmaker Vikram Bhatt! Hina has also bagged Ekta Kapoor’s another project apart from KZK 2. Watch this space for more scoop and updates!