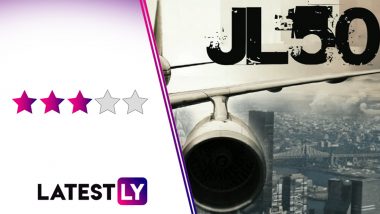 JL 50 Review: Time-Travelled Airplanes... Conspiracy Theories... worm holes... If you are thinking I am writing about a Hollywood thriller, let me introduce to writer-director Shailender Vyas's new mini-series, JL 50. The premise is crazy but the treatment is damn serious, and with a bunch of fine actors in the cast, JL 50 turns out to be a pleasant surprise with a couple of unexpected twists. Though there are some very jarring technical goofs that do irk you here and there. JL50 Trailer Video: Abhay Deol-Pankaj Kapur's Thriller Is Definitely Going In Our 'To-Watch' List.

In Lava, a town on the border of West Bengal and the North East, the kids playing in a ground were in for a surprise one day. Despite the town not being part of a flight route, they see a huge plane over the skies and which then crashes in a valley nearby. Only two people survive the crash, while the rest of the passengers are killed.

Shantanu (Abhay Deol), a CBI Officer in Kolkata, is sent to investigate the crashing, along with his subordinate Gaurango (Rajesh Sharma). Initially, they believe the crashed remains of that of another recent missing flight. On further investigation, though, they find out startling evidence that this flight could possibly be that of JL 50, a passenger plane that took off from Kolkata 35 years back only to disappear mysteriously mid-air.

Watch the Trailer of JL 50:

Shantanu, unable to believe that the flight could have time-travelled, tries to investigate the surviving pilot Bhiu (Ritika Anand, also the producer), who herself is shocked with the happenings. Trying to dig deeper into the mystery, Shantanu tries to cover each and every angle, which brings him to Professor Mitra (Pankaj Kapur), an expert in physics. Meanwhile, more chaos arrives when the second survivor wakes up from the coma.

For those who didn't know this, JL 50 was supposed to be a movie, before it was divided into a four part series streaming on SonyLIV. Thanks to lockdown, 'series' sounds way too cooler than a movie! The film seems inspired by an unconfirmed American urban legend of Pan Am Flight 914 that allegedly disappeared in 1955, only to return 37 years later. The legend has it that the passengers embarked from the plane as if nothing happened, and when they realised that they landed in future, they returned to their plane which flew away, never to be seen again.

The JL 50 flight in the series, may not have such a fairytale ending, as it becomes grimmer and darker, even though the viewer is not allowed to see most of the repercussions. All we see from the crash are the tattered seats, broken glasses and a burnt doll, leaving everything else to our imagination.

For a series with a high concept premise, at least Bollywood-wise, JL 50 has Shailender Vyas do a good job of producing an arresting thriller that is engaging in most parts. Even with the allusions to time travel and even UFO's, JL 50 mostly opts for minimalism and relies on its storytelling to extract maximum impact. The few shots of VFX used, betray the film's lack of budget, but thankfully, they don't really hamper the narrative much.

The suspense building is done in a meticulous manner, and things are kept as simplistic as possible. In between, the film veers towards mythical conspiracies, that gives a mythical allure to the whole mystery. Sure, there are a couple of ideas borrowed from other films. Like the explanation of wormholes by Mitra using a paper and pencil is an idea borrowed from the 1997 film Event Horizon, which Christopher Nolan also borrowed for his Interstellar, another film that dealt with wormholes.

We can also draw parallels to a very popular Hollywood film on time-travel, that I won't name here for obvious reasons. But influences aside, JL 50 has an original story to say and it is done so in a way that keeps you hooked till the end. There are a few lackings in the execution, apart from the mediocre VFX, that are jarring. Like a graffiti of the year 1982 splashed across the screen, when it was supposed to be 1984. Or a shooting down of a treacherous character in the climax that is very amateurishly shot. Abhay Deol Asks 'Will Indian Celebrities Stop Endorsing Fairness Creams Now,' Twitterati Support Him! (View Post).

You also have to suspend your disbelief with regards to the rules of time travel, especially disregarding whatever explanation was thrown at you in films like Avengers: Endgame and Primer.

Apart from these flaws, I was carried away with Shailender's tight storytelling and direction. There was a terrific twist in the second half that I didn't see coming. Another favourite scene of mine involves Mitra taking digs at our mentality to revere anything as Godly if it is beyond our comprehension, instead of questioning how it happened. Also watch the end-credits of each episode where you will be treated with some lovely songs.

Talking about the performances, Abhay Deol gives a fine performance as the investigating officer, haunted by a past he isn't very sharing of. There is also the amazing Pankaj Kapur who is fantastic as the professor harbouring a secret. Ritika Anand is decent. Piyush Mishra is hammy in parts.

- A Couple of Amateurish Shots

With its bonkers premise and distraction-free storytelling, JL 50 comes across as a pleasant surprise and worth recommending for those wanting something hatke in Indian content. JL 50 is streaming on SonyLIV.

(The above story first appeared on LatestLY on Sep 04, 2020 12:01 AM IST. For more news and updates on politics, world, sports, entertainment and lifestyle, log on to our website latestly.com).