Jodhaa Akbar Fame Ravi Bhatia Splits With Wife Yulida Handayani After Three Years of Marriage, Says Got Hitched in a Hurry Because She Was Pregnant

Ravi Bhatia revealed that the cultural differences between him and Yulida were a major reason for their split. He also spoke about how the two got married in a hurry and it was an impulsive decision. 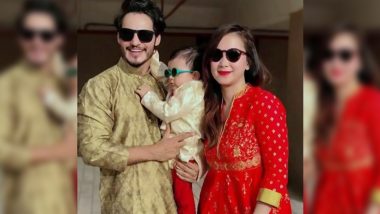 After Pooja Gor's heartbreaking revelation about her break up with Raj Singh Arora, another actor has opened up about his marriage coming to an end. Jodha Akbar fame Ravi Bhatia, who essayed the role of Salim on the show, has revealed that his marriage of three years is over. Ravi married Yulida Handayani back in 2017 and have a three-year-old baby boy Yurav. Confirming the separation, Ravi told Times Of India that it was a decision that they had to take to live a happy life. Mann Kee Awaaz Pratigya Actress Pooja Gor Confirms Split With Raj Singh Arora In A Frank and Honest Post.

Talking to Time Of India, Bhatia revealed that the cultural differences between him and Yulida were a major reason for their split. He also spoke about how the two got married in a hurry and it was an impulsive decision that led to them parting ways after three long years. "Yulida and I were in a relationship for a short while, but she got pregnant and we got married. When we got married, she was three months pregnant. Marriage is a big decision and it needs to be given a serious thought," stated the actor.

He went to say, "She’s a nice girl, but cultural differences were some of the reasons for the break-up. She could not settle down in Mumbai due to the language barrier. She did not make many friends and to an extent, that was my mistake, too. I was so busy pursuing my career that I could not give her quality time. She used to feel lonely and missed her family a lot. So, we both felt it was best to separate amicably and live happy lives.”

Ravi also told the daily that Yulida has the custody of their three-year-old son Yurav. “The best part of our relationship was our son and I miss him very much. I know she will take good care of him, so it was best that he grows up with her. Every night when I go to sleep, I feel his presence by my side. He has a bright future ahead and I will fulfil all my responsibilities that I have towards him,” Ravi said. Pooja Gor and Raj Singh Arora’s Relationship on the Rocks? Here’s What the Couple Has to Say!

Concluding his answer, Ravi advised anyone who is in a relationship to spend quality time with each other. He said that regardless of the fact that Yulida and he share a healthy friendship, Ravi strongly feel that one should get married only after considering all points of a companionship.

(The above story first appeared on LatestLY on Dec 17, 2020 05:06 PM IST. For more news and updates on politics, world, sports, entertainment and lifestyle, log on to our website latestly.com).