Kaun Banega Crorepati 12 Episode 1 Review: Amitabh Bachchan’s Quiz Show Is Off to a Great Start in The New Normal 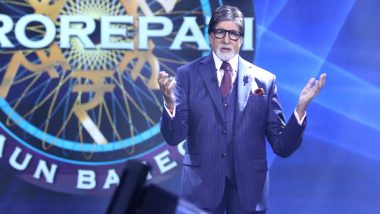 Amitabh Bachchan is finally back with India's most-awaited quiz show Kaun Banega Crorepati as season 12 went on with a promising start. The Sony TV show has been shot amid the COVID-19 pandemic which has forced the makers to undergo some changes in rules of the game which was evident. KBC 12 aired on 9 pm tonight was audience-less under the strict COVID-19 protocols. Which is also the reason why the audience poll life-line gets exempted from the show for the first time in the history of KBC and a new life-line called video-a-friend is introduced. Previous seasons had 10 contestants participating the fastest fingers first and this time it's limited to just 8. These KBC contestants are allowed to accompany single companion with them on the sets which would be the new normal in the times of COVID-19. Kaun Banega Crorepati 12 Premiere: 6 Ways How COVID-19 Changed Amitabh Bachchan’s Quiz Show

Kaun Banega Crorepati 12's star host Amitabh Bachchan returns to the show with great energy sharing his thoughts on the tough times of this pandemic and went on straight with the fastest fingers first question.  Aarti Jagtap was the only contestant to give the right answer in fastest fingers first round, The 20-year-old engineering student from MP who aspires to become a civil servant played wisely and made the right use of her each and every lifeline. Amitabh Bachchan welcomed her with generous claps as she sat down in the hot seat to begin the 12th edition of the popular quiz show following social distancing measures. Big B introduces the show format which is similar to the previous few seasons as contestants get 45 seconds for the first five questions and 60 seconds for the next five. lifeline as usual is 50-50, flip the question and ask the expert (Vikas Swarup, author of the novel Q & A, which was adapted to Danny Boyle's oscar-winning film as Slumdog Millionaire was the guest expert) Kaun Banega Crorepati 12 Premiere: Amitabh Bachchan’s Quiz Show Pays Tribute to Sushant Singh Rajput Through This Question on Dil Bechara

The show just began and the second question had Big B play AR Rahman's Dil Bechara song. The contestant was asked to guess which actress made her film debut that appears in this song and Aarti answers it rightly, Sanjana Sanghi. Another question asked from the entertainment beat was an image clicked at the trailer launch of Akshay Kumar's Mission Mangal and the contestant was asked to name the real ISRO Mission's name on which the film was based on - Mangal Yaan was the answer

Surprisingly yet another question from Bollywood was asked and Aarti answered it without hesitation. The question was as follows - Which actor's film production company name has a spice to its name ?? Options were Salman Khan Saif Ali Khan, Shah Rukh Khan and Aamir Khan. The answer was obviously SRK as he owns Redchillies entertainment.

Which chemical was leaked as highly toxic gas in tragic Bhopal gas tragedy and the answer was Methyl Isocyanate. Another top question from the quiz show was as follows 'Matoshri Book by Sumitra Mahajan was written on which Queen?' This 6.4 Lakh question was answered by Aarti Jagtap as she was on no risk, she answered correctly - Rani Ahilyabai Holkar.

This 12.5 Lakh question was the Trickiest

Liked how the question read - 'Who actually invented..' and not 'Who invented..' .. tells us how controversial the inventions were. @babubasu @SrBachchan #KBC12 #KBC pic.twitter.com/xOWYn9dG9Z

Hans Lippershey Dutchmen who patented the idea and not Galileo Gaileli. Aarti Jagtap wisely opted to quit the show and took away 6.4 lakhs home.

Next contestant victorious in the fastest fingers first round is Sonu Kumar Gupta From Baliya UP a service technician by profession and continues playing the show on the next episode. Viewers can catch KBC 12 on the Sony TV channel from Monday to Friday at 9 pm. Audiences can also watch Amitabh Bachchan's quiz show live on SonyLiv App or on Sonyliv.com on subscription. Jio and Airtel subscribers can also watch KBC 12 live streaming for free on Jio TV and Airtel TV app. Stay tuned for more updates on the Sony TV show.

(The above story first appeared on LatestLY on Sep 28, 2020 11:14 PM IST. For more news and updates on politics, world, sports, entertainment and lifestyle, log on to our website latestly.com).