Actor Jay Bhanushali will soon be resuming work. And to ensure the safety of his family, the actor, who has been roped in for the special edition of Khatron Ke Khiladi, where he will be seen performing some daredevil stunts, the actor has decided to move out of his current residence. 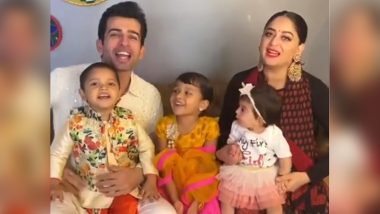 Actor Jay Bhanushali will soon be resuming work, after enjoying the entire lockdown period with his 10-month-old baby Tara and her siblings Rajveer and Khushi. And to ensure the safety of his family, the actor, who has been roped in for the special edition of Khatron Ke Khiladi, where he will be seen performing some daredevil stunts, the actor has decided to move out of his current residence. "Apart from Tara, I also have Rajveer and Khushi at home. So, I can’t afford to take any chances," revealed Jay who will soon be moving out of his house, albeit, temporarily. Khatron Ke Khiladi 10 Gets 8-Episode Extension, Rithvik Dhanjani, Nia Sharma, Aly Goni, Jasmin Bhasin To Shoot For Adventure Reality Show From July 21 (Deets Inside).

"I was reluctant about going back to shoot amid the pandemic, but there is no certainty about when things will return to normalcy. That’s when Mahhi and I decided that one of us will have to step out to work. I am in the process of packing my stuff," revealed Jay to Bombay Times. Jay Bhanushali Gets Emotional After Daughter Tara Chants 'Papa', Says He Was Waiting For It For Long (Watch Video).

Our world, the most peaceful, inside our homes with these little angels who are truly keeping us on our toes, keeping us entertained, and busy! I know we are surviving this lockdown only because you three.....you make us realize there's so much love, there's so much care, there's so much to give in life! Love you my little babies! . . . #MothersDay #HappyMothersDay #MothersDay2020 #MotherHood #MomLife #ThankYou #LoveYouAll #MyKidsAreMyLife #HappyPlace @ijaybhanushali @tarajaymahhi @rajveercutestar @iamkhushiray

And the minus side of Jay returning to work is that he will miss daughter Tara's first birthday. He revealed, "I have never been away from my baby, so I don’t know how difficult it will be to live without her. I will be away from July 18 to August 8, and Tara will turn one on August 3. I was looking forward to celebrating her first birthday in my own little way, but I won’t be a part of it now. However, I am keeping a positive attitude. When she grows up, I will tell her how her father couldn’t be a part of her first birthday celebrations due to COVID-19." The actor also revealed that before returning home after work, he will undergo a COVID-19 test as well.

(The above story first appeared on LatestLY on Jul 15, 2020 04:03 PM IST. For more news and updates on politics, world, sports, entertainment and lifestyle, log on to our website latestly.com).