Life Navrangi: Aamir Ali Talks About Playing the Role of a Disgruntled and Disillusioned Journalist

Popular actor Aamir Ali is seen playing the role of a young journalist, Vishwas in the web show Life Navrangi. 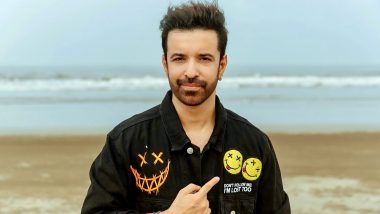 Popular actor Aamir Ali is seen playing the role of a young journalist, Vishwas in the web show Life Navrangi. The actor told IANS about his character and his shooting experience for the series. Life Navrangi is the second season and it is a follow-up to Navrangi Re!, the show on sanitation and dealing with aspirations of people from small towns. Bigg Boss 14: Aamir Ali Approached For the Salman Khan Show, Turns Down the Offer (Deets Inside).

Aamir said: "The character I play is of Vishwas, a disgruntled, disillusioned journalist who wants to live life on his own terms. He wants his stories to make a difference. That is why he moves from a news channel to try something new. This move takes a lot of courage and moral strength. He arrives in Nirmal Niketan where he meets Saloni(Krishna Mukherjee), a runaway bride who happens to be a budding Youtuber going by the name #SimplySaloni. "

"Together, they started a YouTube channel called, Tedhi Medhi Kahani that puts a spotlight on real issues and news, instead of fake news. While they are working on putting out meaningful, genuine content, they discover real issues, plots and schemes that need to be brought to public notice. Their stories start creating awareness and make a difference to the community."Aamir Ali Enjoys a Day at the Beach With a Mystery Girl, Fans Think Its His Estranged Wife Sanjeeda Shaikh.

"They become part of the mohalla and their own chemistry grows, as does their bitter-sweet relationship with the rest of the people. And in all of this, there are great insights and lessons, for the characters as well as the viewers," he added. As the show is based in Bhopal, the entire shooting happened in the city and the I Hate Luv Storys actor said it was all fun.

"The experience of shooting in Bhopal was fun. When we started shooting, the third wave had just hit India, so we were very careful. All Covid protocols were followed strictly. The production house Bodhitree arranged a small centre where all the cast and crew could be checked regularly."

When asked if he related to his character in the series, he said: "Our personalities are very different. I am from the city whereas my character, Vishwas, is from a small town. Having said that, there is a bit of me in every character I play. Vishwas was slightly sarcastic and cocky - I enjoyed that aspect of his character and I had a lot of fun playing it." The actor shared that he enjoyed the street food of Bhopal.

"Bhopal was a lovely experience because we were shooting in live locations. That really helped me get into the mindset of the character and perform better. I really enjoyed the local cuisine - as a foodie myself I had a great time discovering and relishing the street food in Bhopal."

When asked the reason behind saying 'yes' to the show, he revealed: "The concept of the show is unique, and the treatment is not preachy at all. It mainstreams a much-stigmatized and less-talked about, invisible issue, that of Faecal Sludge Management, in an engaging, entertaining manner. The show is a mix of comedy and drama with a very strong message that is so well-built into the plot and characters."

"Maybe a couple of years back, I would have not done such a show but now times are changing. You rarely get a chance to be associated with projects that have a tangible impact on society and positively influence behaviour change. I am grateful that this opportunity came along, and it has been a great learning experience," he shared.

You have completed twenty years in the industry - how has your journey been and he answers: "20 years mean lucky and blessed. I have had an amazing journey. As an actor you always feel things could have been better, that you could have had better work and roles, but that is what keeps you going. Whenever I feel I have achieved something, I go looking for the next challenge," replied the actor who has worked in a number of films and television shows.

"For instance, I peaked in my television career early on, I have done 8 TV shows as the main lead and even a reality show. Now, I am preparing for my next phase of journey, i.e., OTT and digital storytelling. It is challenging and exciting, both at the same time."

Do you feel the series will have a similar impact as the movie Toilet: Ek Prem Katha and he concluded: "Initially, when Toilet: Ek Prem Katha was made, people were unsure whether the film would work or not, because it was on the issue of sanitation. The worry was that the movie would be 'preachy'. However, it was a brilliant movie with a strong social message. Any movie, whether it is a commercial movie or a movie with a social message, if done properly - will be a hundred percent success."

(The above story first appeared on LatestLY on Jun 29, 2022 04:09 PM IST. For more news and updates on politics, world, sports, entertainment and lifestyle, log on to our website latestly.com).