Aamir Ali Enjoys a Day at the Beach With a Mystery Girl, Fans Think Its His Estranged Wife Sanjeeda Shaikh

In one of the pictures, the two are seen running on the beach hand-in-hand while in the other photo, Aamir is seen giving her a piggyback ride. 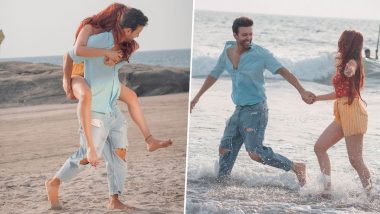 Many hearts were broken to hear that lovebirds Aamir Ali and Sanjeeda Shaikh had parted ways last year. While Aamir and Sanjeeda never addressed the issue publicly, it was reported that last year during the lockdown, the actress decided to call it off. She went to her mother's place to stay and did not come back. The couple was having some issues and hence decided to call it quits. While they were living separately since the lockdown, the two did not officiate the divorce on papers. But it finally looks like things are getting better. Sanjeeda Shaikh and Aamir Ali's Marriage Of 8 Years On The Rocks? Actors Living Separately?

Aamir Ali posted a few pictures on social media with a mysterious girl and it has everyone thinking if she is Sanjeeda and if they are back together after all. Aamir is seen wearing a blue shirt paired with a pair of ripped denim jeans in the pictures. The mystery woman is seen sporting a pair of yellow striped shorts paired with a printed red top. In one of the pictures, the two are seen running on the beach hand-in-hand while in the other photo, Aamir is seen giving her a piggyback ride. The girl has managed to hide her face with her beautiful tresses in both the pictures.

Remo D'Souza was amongst the first ones to drop a comment on his photo. He wrote, "Arey??" clearly indicating that something is cooking up. Remo's wife Lizelle Remo D'Souza also dropped a comment on the photo. Fans started to speculate who the mystery girl was. Many users noticed the details and thought it was Sanjeeda. A user commented saying that the red hair and the anklet in the photo are Sanjeeda's' and it is indeed her. Many even tagged a new girl named Hiba Nawab, saying it was her. We wonder, what the actor is up to. JUST IN: Aamir Ali and Sanjeeda Shaikh Have A 4 Month Old Daughter! Sanjeeda REACTS With A Cryptic Post?

Workwise, Aamir Ali will be seen in Zee5's next, Naxalbari. Set in Goa, the series sees the naxals do their best to deter a businessman from taking over what's their land. The film also stars Rajeev Khandelwal, Tina Datta, Sreejita Dey, and Satyadeep Mishra in key roles.

(The above story first appeared on LatestLY on Jan 15, 2021 12:14 PM IST. For more news and updates on politics, world, sports, entertainment and lifestyle, log on to our website latestly.com).