Strangely, the latest episode has no mid-credit scene, something which was part of the fourth episode. Most of the questions will be answered in the final episode, which will arrive on Disney+ Hotstar Premium on July 14 at 12.30 pm. The series also stars Gugu Mbatha-Raw, Wunmi Mosaku, Tara Strong, Owen Wilson, Sophia Di Martino, Sasha Lane, Jack Veal, and Richard E Grant. 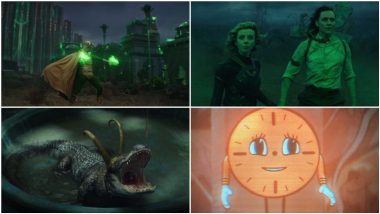 Loki, Marvel Cinematic Universe's third Disney+ series, is now challenging WandaVision and Doctor Strange in being the weirdest and trippiest outing of the franchise, there is. The fifth episode of the show, starring Tom Hiddleston in the lead, dropped some time back, and it turns out to be Loki's most ambitious, weirdest episode that also serves some surprising turns, laughs (President Loki), bizarre turns (even Lokis find Alligator Loki an oddity!) and a tragic demise. Oh yes, and plenty of Easter Eggs (Throg!) too! And now we are closer to cracking who was behind TVA, the man (or something) in the high castle. Loki Episode 4 Mid-Credit Scene Explained: What Happens in This Secret Scene in Tom Hiddleston’s Marvel Series?

As we go on about our thoughts of the ending of this episode, let's also warn you that the below post is filled with SPOILERS! So tread ahead with caution.

Sylvie and Loki (sorry, but their romantic moment still remains weird, no matter the joke on narcissism) plan to escape from the Void with Sylvie trying to enchant Alioth, the cloud dog that kills Variants landing on the Void. Apparently, MCU decided to ignore fan's absolute disdain for anything cloudy since Fantastic Four: Rise of the Silver Surfer's Galactus and Green Lantern's Parallax.

Anyway, after sending Mobius back to TVA so that he can tell the rest of the employees the truth about the organisation using Renslayer's TemPad, Sylvie and Loki go on to trick Alioth. Kid Loki and Classic Loki stay behind at the Void, with Alligator Loki, because that's their home now.

The Distraction and the Death

Loki was right that they need to distract Alioth to overpower it, and he was ready to be one. However, while he temporarily managed to get the Cloud Dog's attention, it wasn't enough, as Alioth went for Sylvie who was readying herself to enchant it. However, Classic Loki comes to their rescue and he builds an illusion of the whole city of Asgard to catch Alioth's attention. It worked, while inspiring Loki to realise they are more powerful than they know and he even works out Sylvie's enchantments. It is interesting to note here, that the scene reminded us of how Wanda did something similar in WandaVision as she remodelled the town of Westview, though she even went on to enchant the residents there. So does her power equate to what Lokis possess? Loki Episode 4 Song If You Love Me: From the Artist to the Lyrics, Know More About the Track That Played During the End-Credits of Tom Hiddleston’s Marvel Series.

However, maintaining that huge illusion takes a toll on Classic Loki, as what he builds begin to crumble before Alioth goes for him. But he doesn't go out on a whimper, as Classic Loki cackles his way to his imminent demise, screaming 'Glorious Purpose!' before Alioth swallows him leaving only the helmet behind.

It was a wonderful special appearance from the great Richard E Grant, and his demise would definitely leave an impact on Marvel fans. His death does break the rule that Lokis always survive, but here is a Loki who has hated, loved and lost, and have lived with that pain for many, many years even before he arrived on the Void. I would want to believe that the 'Glorious Purpose' he was screaming about meant that he is finally getting his emancipation, and that he dies in peace of meeting his loved ones who have departed.

Let's also not forget that in the conversation he had with Mobius, the latter speaks about it being never too late to change, even for a Loki. Guess, that was the moment of change for Classic Loki!

In the hullabaloo that happened in the frenzied ending, we overlooked that Kid Loki is still on the Void and was not anywhere near the action. Also, yes, the weird Alligator Loki is also with him. So if Loki and Sylvie manage to bring down TVA, does that mean Kid Loki would go on to be part of Young Avengers series, whenever that happens? Will we get to know how he got to kill Thor? Also, we need more of Alligator Loki!

The Castle Behind the Curtain!

After Sylvie and Loki manage to enchant Alioth to show who is behind its working, the clouds parts away like a curtain to reveal a mysterious castle in a forlorn place. Considering we only have one more episode to go, whoever lives in that castle is most likely to be the one (or many) behind TVA's existence.

Fans are already speculating that Loki and Sylvie would find Kang the Conqueror there. Though it is heavily rumoured that Jonathan Majors has been cast in the role, we don't really believe that such a major villain would be making a debut in a series. Remember the whole WandaVision-Mephisto fiasco? So rein in your mammothian expectations, geeks!

Interestingly Renslayer is also seeking the brains behind the TVA, and she chooses to do so by going back and learning about the creation of Time. With Mobius returning to TVA, will we have them team up? Or will they meet their ends by the hands of a character, who could have been a sneaky villain we didn't recognise all along?

Voiced by Tara Strong, Miss Minutes is the animated go-to assistant for TVA, kinda like how Alexa works for us. While she had a part to play in the first two episodes, the next two episodes underplayed her existence. However, the fifth episode has shown us a facet of her that could mean some very interesting implications.

We find out that Miss Minutes was smart enough to stall Sylvie and call in the TVA Hunters to capture her, without Renslayer even giving the command to do so. When Renslayer later asked her to give files for the beginning of Time, Miss Minutes even tells her that it is a 'tall order', before complying. Which makes us think that there is more to her than what she wants to show. Does that mean that behind the smiling, playful facade, Miss Minutes is hiding someone evil behind?

Strangely, the latest episode has no mid-credit scene, something which was part of the fourth episode.

Most of the questions will be answered in the final episode, which will arrive on Disney+ Hotstar Premium on July 14 at 12.30 pm.

(The above story first appeared on LatestLY on Jul 07, 2021 02:46 PM IST. For more news and updates on politics, world, sports, entertainment and lifestyle, log on to our website latestly.com).