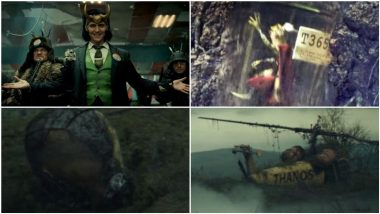 If you haven't watched the new episode of Loki, then what are you waiting for? The fifth episode of Marvel Cinematic Universe's ongoing Disney+ series has dropped and it is one action-packed outing, with plenty of laughs, surprises, twists, poignant moments and one sad demise. Also lots of Lokis and lots of Easter Eggs. Loki, directed by Kate Herron, stars Tom Hiddleston in the lead, along with Gugu Mbatha-Raw, Wunmi Mosaku, Eugene Cordero, Tara Strong, Owen Wilson, Sophia Di Martino, Sasha Lane, Jack Veal, and Richard E Grant in the cast as well. Loki Episode 5 Ending Explained: Decoding the Major Character Death and the Final Reveal in the Trippiest Outing of Tom Hiddleston’s Marvel Series.

Speaking of Easter Eggs, the fifth episode has some really fun ones to throw at you, including some interesting callbacks to Marvel comics, cinematic moments and even hints at MCU's future in general. Here, check out 10 such Easter Eggs as discovered by Marvel fans, who are sharing them on Twitter:

THROG CAMEO. I THOUGHT I MISSED SOMETHING THERE FOR A SEC BUT I WAS RIGHT 😂😂😂 pic.twitter.com/Eow9RYKkLa

As the camera pans down towards the Lokis' hideout in Void, we see a frog jumping inside a jar. A closer look reveals that he is wearing a red cape. Readers of Marvel comics can recognise him as Throg, a Marvel character who is turned into a frog but possesses Thor-like powers. His real name was Simon Walterson.

This explains how Jane Foster get Mjolnir in Thor: Love and Thunder#Loki pic.twitter.com/GfNV7oLryZ

We also realise why Throg is jumping in the jar, as he is trying to break out and wield Thor's hammer Mjolnir that is also embedded in the ground. Wonder who put Throg in that jar!

A little Easter Egg if y’all miss it pic.twitter.com/78z00WN8XN

Yup, in comics, Thanos used to own a helicopter, which he used in a storyline to capture the Cosmic Cube. The Thanos Copter was spotted in the episode at the beginning.

the president loki minor content we got is and will forever be iconic and amazing pic.twitter.com/ctLQn9xsk3

Wonder who the arrogant, self-proclaimed doppelganger Loki was? The subtitling gave his identity away as President Loki. This is probably a tribute to the 2016's four episode comic arc called Vote Loki, where he ran for the President of the United States.

That Thor: The Dark World Throwback!

losing their right hands at one point pic.twitter.com/0wG9sjbIHJ

From Star Wars to now Loki, Disney sure loves to get some of its characters have their hands chopped off! But of course, we can't help but recall when in Thor: The Dark World, Loki created a illusion to fool Malekith that he chopped off Thor's right hand. Unfortunately for President Loki, his alligator counterpart did chomp off his hand!

THE GREATEST PLOT TWIST OF ALL TIME pic.twitter.com/BsYyBRc660

So Mobius finally gave permission to Loki to do what he promised to do in the first episode!

So after getting obliterated in Ant-Man movie, did Yellowjacket land in Void where he was devoured by Ailoth?

All of my useless knowledge about polybius from countless documentaries and articles pulled through this episode #loki pic.twitter.com/EkjCYqEdgJ

Eagle-eyed Marvel would have noticed this sinister Easter Egg, that like DB Cooper from the first episode, is kind of an urban legend. It came out of a rumour that US government is running an experiment on the people in the '80s using an arcade game that produces intense psychoactive and addictive effects in the player. Loki: Who Is DB Cooper? Know More About the Real-Life Mystery Plane Hijacker Referenced in Tom Hiddleston’s Marvel Disney+ Series!

ITS QENG ENTERPRISES NOT AVENGERS TOWER!!!!

Owned by Nathaniel Richards AKA Kang The Conqueror!!!!! pic.twitter.com/ZrLi0vGNvT

While we thought it was the Avengers tower seen demolished in the background, a closer look shows the word 'Qeng' written on it. In one of the comics, Qeng Enterprises is the company to which Stark Industries sold the old Avengers Tower to Nathaniel Richards, whose one alter-ego is Kang the Conqueror, the Marvel supervillain. So is it really Kang in that castle shown in the final scene?

Remember Thor and Loki's bait-and-throw approach in Thor: Ragnarok? That scene gets a funny call back when Kid Loki throws Alligator Loki at one of the brawling Loki Variants.

(The above story first appeared on LatestLY on Jul 07, 2021 04:07 PM IST. For more news and updates on politics, world, sports, entertainment and lifestyle, log on to our website latestly.com).