Nehha Pendse clarifies that she is not replacing Saumya Tandon in Bhabiji Ghar Par Hain! Check it out. 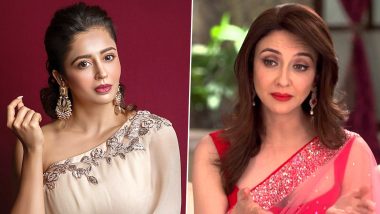 It came as a shocker to many when Television actress Saumya Tandon who is known for her role as Gori mem on the comedy show Bhabhiji Ghar Par Hain decided to say goodbye to the hit serial. As soon as this news made it to the web, speculations around who will take her spot in the daily soap started making headlines. Recently, rumours had it that Nehha Pendse will be the new Gori mem and will replace Saumya Tandon on the sitcom. However, looks like that's not the case as Pendse herself has set the record straight. Nehha Pendse Hits Back At Trolls Targetting Her Fiance Shardul Singh, Reveals She'll Tie The Knot in 2020! (Read Details).

For the ones living under the rock, Neha has earlier collaborated with producer Benaifer Kohli in May I come in Madam? She played the role of Sanjana Hiteshi on the show and was loved by fans. During her interview, Pendse was also quizzed if she will be seen on TV soon. To which she replied, "I have done a film 'June' and we are waiting for its release. I am waiting for something worthy enough to step out of the house. Just don’t want to take any work for the heck of it." Shefali Jariwala To Replace Saumya Tandon in Bhabiji Ghar Par Hain?

Earlier to Neha, it was Kaanta Laga babe Shefali Jariwala's name which was popped to be part of Bhabhiji Ghar Par Hain as Gori mem. However, the producer had denied the said reports. So now, it's no Neha, no Shefali, and so we wonder, who will replace Saumya Tandon? Mystery continues. Stay tuned!

(The above story first appeared on LatestLY on Sep 28, 2020 12:35 PM IST. For more news and updates on politics, world, sports, entertainment and lifestyle, log on to our website latestly.com).