Actor Pracheen Chauhan, previously seen in the TV show Shaadi Mubarak reveals he enjoys practicing retail therapy as it is associated with a sense of achievement. 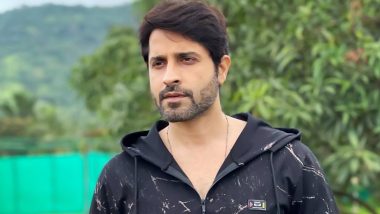 Actor Pracheen Chauhan, previously seen in the TV show Shaadi Mubarak reveals he enjoys practicing retail therapy as it is associated with a sense of achievement. He says: "Since the time I started earning decent amount of money on my own. And once I became an actor I found myself being passionate about retail therapy. It always gives me a sense of achievement and relaxation." Rati Pandey Replaces Rajashree Thakur Overnight in Star Plus' Shaadi Mubarak.

Most people believe that women are more involved in enjoying shopping than men. But Pracheen feels gradually the mindset is changing and men are equally getting in. He adds: "That's true but I feel now the mindset is changing. Men like to look good too, especially actors. It's a part of our profession. We have to look good, presentable and fashionable at the same time. So, soon after I entered this entertainment industry, I started realizing the importance of dressing up well. And there was an inherent liking for fashion and clothes which turned into an obsession also at one point." Kasauti Zindagi Kay: Ekta Kapoor Surprises Fans With The First Promo Starring Erica Fernandes - Watch Video.

The actor, also known for featuring in shows Kyun Hota Hai Pyarrr, Kasautii Zindagii Kay, Kutumb among others, has set fresh set of goals for himself to achieve in helping less fortunate. He shares: "I agree excessive shopping is a waste of money but I devised a plan to not feel guilty and add some value to this addiction or obsession by donating clothes to the needy. I keep my clothes in very good condition. Initially it was difficult for me to give away my lovely clothes as I was too attached to them. But then I overcame it and realized the importance of decluttering your wardrobe."

"Donating clothes gives you a sense of doing something good too. All the clothes that you are not using for a while , somebody else is going to relish them and use them. I have seen the happiness and excitement in the eyes of the people who really need them. Looking at them you feel so peaceful and relaxed. But yes we should not overindulge in shopping because it can turn into an addiction without even realising it. It seems harmless initially but it is not a very healthy practice. We should excercise moderation while shopping," he concludes. Pracheen is currently seen as Abhimanyu in web series Pyar Ka Punch.

(The above story first appeared on LatestLY on Jun 29, 2022 09:32 AM IST. For more news and updates on politics, world, sports, entertainment and lifestyle, log on to our website latestly.com).